You are here: Home / Business / The 100-Year-Old Panama Canal is Getting a Lot Bigger

The Panama Canal celebrates one hundred years today. It may have been used for a century by millions of ships, but its great steel gates of the Miraflores locks still swing open with great precision. They continue to offer safe passage for ships the size of the Titanic. The Panama Canal project, engineered in the days of Teddy Roosevelt, was so incredibly well done and balanced that its 672-ton leaves are moved by nothing more than a pair of 25-horsepower motors. 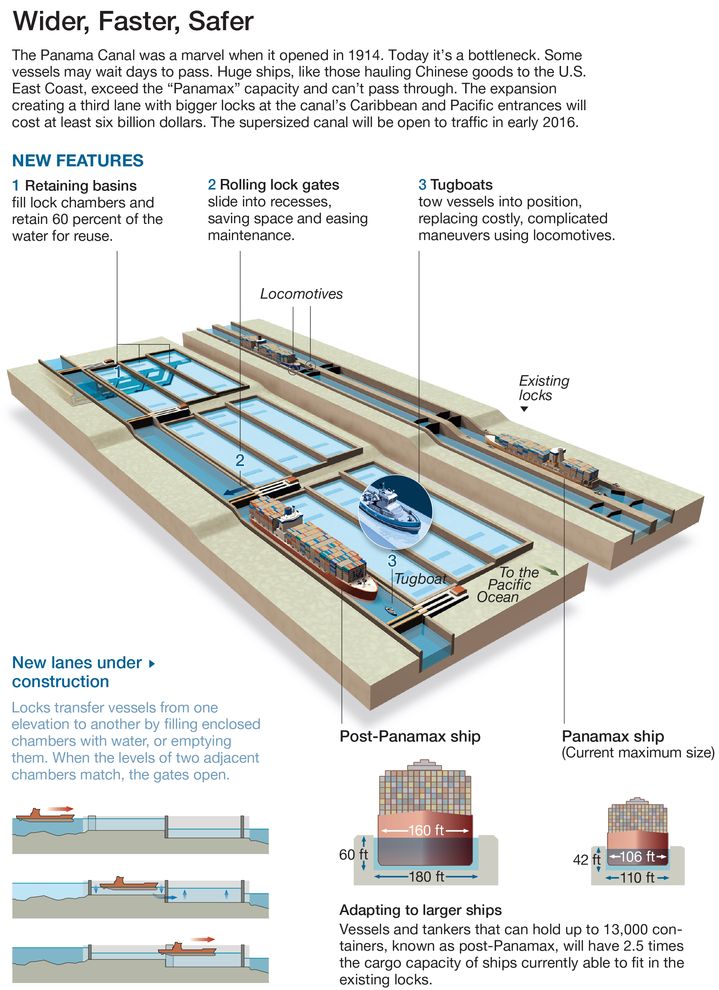 The Panama Canal can still offer safe passage to ships the size of the Titanic, but nowadays, many exceed those limitations. Approximately 14.000 pass through the Panama Canal every year and more than half of them have beams in excess of a hundred feet. This means that they can barely make it through the old doors.

“Picture yourself more than 700 feet from the bow of a vessel, standing on a bridge that’s 12 to 15 stories high, and then easing it forward into the lock with only two feet of clearance either side, and you’ll have some idea what it’s like piloting a big vessel into the lock. Then imagine doing it in the dark and in the rain.”- Captain Miguel Rodriguez

At present, the world’s largest ships (which consist of tankers, container vessels, cruise liners and bulk carriers) can’t make it through the infamous Panama Canal because they are too big. This means, that as popular as the Panama Canal is, it is losing market share every year.

There is a project which aims to expand the canal with the help of a third lane with bigger locks for the Pacific and Caribbean entrances. The super-sized canal is expected to be open to traffic by 2016.

The project was voted for in 2006, when Panamanians decided to give the Canal a 6 billion dollars makeover. The project would widen the Culebra Cut across the Continental dive, dredge the channels, and construct a huge new set of 180 feet wide and 1.400 feet long locks. At the moment, the Panama Canal project is 80% complete.

By the time it is complete, the modern Panama Canal will double the cargo capacity and handle 99% of the world’s container ships, as well as 81% of huge liquefied natural gas tankers.

“It will be a pivotal moment. Not just for Panama but for the all of the trade-driven commerce that is impacted by the Panama route.”

Six billion dollars may sound like a lot of money, but it is nothing compared to the costs that seaports on the U.S. eastern seabord are investing to prepare for the arrival of container ships from Asia.

From Miami to Boston, road and rail links are being expanded, harbors are being dredged, and new cranes are installed to fit over 13.000 containers from giant carriers.

“With East Asia sourcing more and more raw materials out of Latin America, in particular coal and iron ore, the expanded canal will offer enormous new opportunities,” – Valentine Lynch, vice president of planning and business development for the Panama Canal

This is a monumental undertaking, and although the expansion should have been complete for the hundredth anniversary celebrations, construction delays and cost overruns pushed the date back to 2016. It’s stressful work, but a source of great pride. At the moment, experts are already getting used to the giant new locks and learning how to maneuver enormous ships through the navigation channels.

“We’re already training on simulators for the day when the new locks come into service,” Captain Rodriguez says