Northern California was hit by a magnitude 6.0 earthquake earlier this Sunday. The earthquake injured 89 – 3 critically – and also caused great damage to buildings. Fires sparked by burst gas lines were also reported. This is the largest earthquake to have hit the Bay Area since the Loma Prieta quake, in 1989. The previous major earthquake had a magnitude of 6.9. 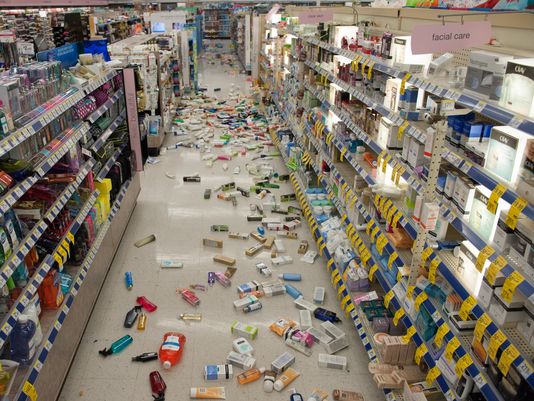 According to Leslie Gordon, from the U.S. Geological Survey, the tremor began just before 3.30 A.M. and it managed to wake up almost everyone in the area. The earthquake occurred approximately 10 miles northwest of the American Canyon (which is roughly 6 miles Southwest of Napa).

The city of Napa declared that two adults and one child were critically wounded. They are currently being treated. Also, Queen of the Valley Hospital, from Napa, is treating 89 people. Vanessa DeGier, a hospital spokeswoman stated that most patients suffered from bruises, bumps and cuts. In addition to this, widespread power outages have been reported in Sonoma County.

A state of local emergency was declared at 8:59 A.M. California time, said City Manager Mike Parness. He added that this is the first step to receiving more help.

“We are asking the governor to declare a state of emergency.” – City Manager Mike Parness, during a news conference

The damages do not stop here. John Callahan, of the Napa City Fire Department, also declared that half a dozen structures were on fire. One of the fires occurred at a mobile home park, where four mobile homes were completely destroyed by the fire. Other buildings were damaged but officials did not state the number.

The water has not been contaminated, and it is safe to drink, Public Works Director Jack LaRochelle declared. After the earthquake, the city’s 911 emergency call system was maxed out. Nevertheless, captain Steve Potter said that there have been no reports of major disturbances.

“We have relative calm for this magnitude of an earthquake.” – Captain Steve Potter

Arik Housley is one of the people who were awaken by the tremor. He owns two grocery stores in the area.

“It was very jolting and probably went for 20 seconds… It was shaking pretty good.” – Arik Housley, owner of two grocery stores

He also added that he passed a mobile home park where multiple fires were visible. He went to his store to assess the damages of the earthquake. According to his report, the shelving in the store moved 2-3 feet from the wall. Much of the inventory fell to the ground (including 200$ bottles of wine)

The USGS says that the depth of  the tremor was less than 7 miles, and several aftershocks happened after the initial earthquake. Scientists say that thousands of smaller earthquakes (approximately 3.5 magnitude) occurred between 1974 and 2003 (4895 is the exact number). This means that, every year, 163 earthquakes happen.