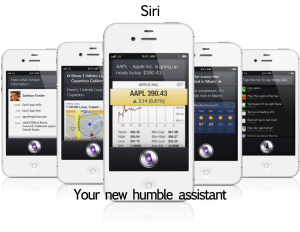 According to a Beijing court, US technology giant Apple lost a lawsuit regarding the validity of a patent held by a Chinese company on Tuesday, therefore allowing the latter to go on with its own case against Apple Inc. for infringing intellectual property rights regarding the voice recognition software for iPhone, also known as Siri.

It all began in 2012 when Zhizhen Network Technology from Shanghai accused Apple of reportedly defying its Chinese patent with Siri, its “intelligent personal assistant”.

Apple’s demand towards China’s patent review board, which operates under the State Intellectual Property Office, consisted of declaring Zhizhen’s original patent ineffective. Moreover, late last year Apple appealed to Beijing’s Number One Intermediate People’s Court to overturn that decision. The request was not approved, as stated on Tuesday: “The court did not support the cause of action stated by Apple. (…) The patent for the invention of the ‘type of chatbot system’ involved remains effective,” the court explained, referring to Zhizhen’s patent.

“Unfortunately, we were not aware of Zhizhen’s patent before we introduced Siri and we do not believe we are using this patent,” said a Beijing-based Apple spokeswoman in an emailed statement to Reuters. Apple also stated that it would not stop here, planning an appeal with the Beijing Higher People’s Court.

Apple’s Siri is a software that responds to a user’s commands through voice recognition. It was initially released along with the iPhone 4S in 2011. However Zhizhen claims its 2003 Xiao i Robot product works in a similar way. Xiao was first introduced as a chat bot for MSN, Yahoo Messenger and other similar applications. It eventually expanded to IOS and Android where it basically has the same features as Siri.

This is not the first time Apple has had legal issues with Chinese technology developers. Back in 2012, Apple paid $60 million to put an end to a dispute with another Chinese firm over the iPad trademark.

The incident began in April, when Yishijia intended to upload to the store the mobile application for Homevv, an online shopping platform. But the application was rejected as the Woshang one, with the same trademark, had already been uploaded there. Apple refused to cooperate and take the application down, despite Yishijia’s several requests. Yishijia has owned Homevv trademark since 2010.