The most enigmatic consequences of quantum mechanics is the rules that govern the behavior of tiny subatomic particles is that individual particles can pass through potential barriers that would otherwise be impenetrable even though its energy would not allow for the corresponding classical trajectory. It manifests itself in a multitude of well-known phenomena and is known as the quantum tunnel effect. Nuclear radioactive decay, fusion reactions in the interior of stars and electron transport can be explained through quantum dots. Tunneling allows imaging of surfaces on the atomic length scale in scanning tunneling microscopes and is also at the heart of many technical applications.

According to a new study, quantum tunneling effect can occur over relatively long distances, with particles seeming to shift places even when several other particles stand in the way.

Subatomic particles of quantum mechanics don’t have one fixed location until they are measured. Instead, the tendency of a particle of being in every possible location without a nudge is very, very small, but it’s not zero.

Quantum tunneling actually underlies many fundamental processes in nature, though it defies most human expectations about the physical world. 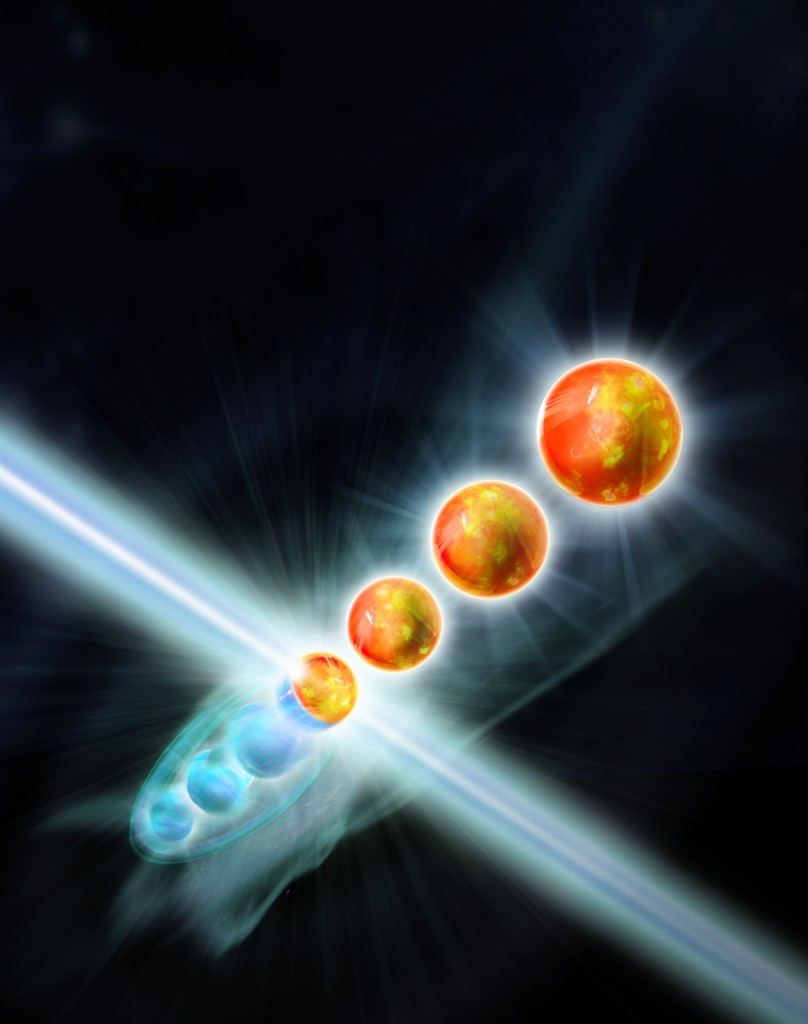 The team led by Ngerl and his colleagues decided to create a physical quantum simulator that could mimic other quantum systems and cooled cesium atoms to just above a temperature of absolute zero (minus 459.67 degrees Fahrenheit, or minus 273.15 degrees Celsius) and placed the atoms in a virtual lattice created with intersecting beams of high-intensity lasers. A pattern of bright and dark regions, or an energy landscape, that “looked,” to the atoms, like a board covered by rippling peaks and valleys was produced by the beams. At such low temperatures, the random jiggling of atoms almost completely stops, leaving no energy for the atoms to move except using quantum tunneling. A force that slightly shifted the energy landscape in essence was applied by the team, tilting the board so that the particles would want to move down the board. To accomplish this feat, the cesium atoms share spots with other cesium atoms in the lattice, transferring the energy they shed by moving down the board through interactions with other cesium atoms. But the particles didn’t tunnel through just one barrier; instead, the team observed multiple atoms moving to spots separated by up to five different barriers, sharing spots with other atoms and leveraging their interaction with other atoms, in a process known as interaction-shifted tunneling resonance.

Jonathan Simon, a physicist at the University of Chicago who was not involved in the study said that the observation of these resonances over so many lattice sites is new.

He further added,” The farther the atoms hop, the tunneling process becomes slower and slower. This does not bode well for scaling such interaction-shifted tunneling resonances to a larger number of lattice sites. Development of intuition for the quantum dynamics of even five or six particles is already exciting and important.”