NASA figures out how to smell Saturn’s moon Titan right here on Earth by an interplanetary smell-o-scope experiment, processing data from the Cassini spacecraft and reproducing the smell of another world.

A new recipe that captures key flavors of the brownish-orange atmosphere around Saturn’s largest moon was created by a team led by Joshua Sebree, assistant professor at the University of Northern Iowa in Cedar Falls and former postdoctoral fellow at NASA Goddard and has enabled us to classify previously unidentified material discovered by NASA’s Cassini spacecraft in the moon’s smoggy haze.

Scientists originally tried mixing nitrogen and methane, the two most common gases in Titan and couldn’t really make it work. These experiments never produced a mixture with a spectral signature to match to the one seen by Cassini; neither have similar experiments conducted by other groups. 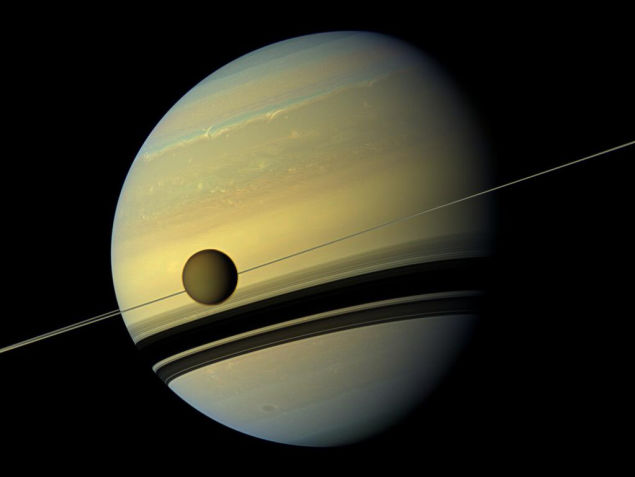 New combinations were added like benzene and other chemicals and they thought it would correspond to what they were seeing in Cassini’s spectrograms. The result was analyzed with a spectrograph once the experiment was finished. According to Sebree “this is the closest anyone has come, to our knowledge, to recreating with lab experiments this particular feature seen in the Cassini data.”

“It has a strong aromatic character”, says Melissa Trainer, one of the planetary scientist at NASA’s Goddard Space Flight Center in Greenbelt, Maryland. “According to her it smells of a subfamily of hydrocarbons known as aromatics. Benzene is part of this family, and it has a “sweet, aromatic, gasoline-like odor.”