Every living organism knows how to save its life during calamity. A new study has presented a good example of this fact through red fire ants.

According to the researchers, the red fire ants (Solenopsis invicta) save their lives in the rising water levels by rapidly gripping onto their nearest neighbors and forming rafts.

Researchers say each ant is denser than water and is in danger of sinking. But the ants are blessed with a unique instinct which they help in managing to stay afloat.

For forming rafts, they routinely form bivouacs, assemble towers and even coalesce into droplets when swished in a cup. 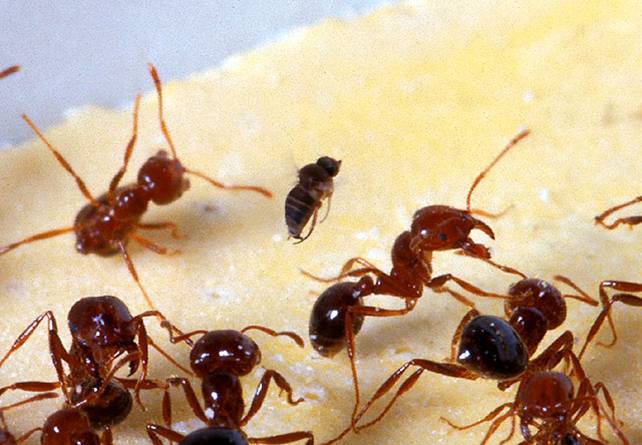 Red fire ants form rafts to secure them from water

“You can consider them as both a fluid and a solid,” said study author, David Hu from the Georgia Institute of Technology.

Paul Foster and Nathan Mlot were other researchers of the experimemt who investigated how balls of living fire ants self-assemble.

During the study, the researchers found that the fire ants form complex networks of connections between their bodies and limbs. They align their bodies perpendicularly and push against each other with their limbs to reduce density and buoyancy.

For the study, the researchers swirled about 110 ants in a beaker to form a sphere. The team workers then swiftly froze the structure in liquid nitrogen and coated it in Super Glue vapor. This was done in order to preserve the minute contacts within so their images could be captured using a CT scanner.

“With the CT scan we can focus on individual ants and see how they are connected to their neighbors,” Hu explained.

The researchers said that Foster and Hu discovered that on average, each ant participated in 14 contacts. They gripped their  neighbors.

“It turns out that 99% of the legs are connected to another ant, and there are no free-loaders,” said Hu, who admits that he was impressed by the high degree of connectivity.

The study is published today in the Journal of Experimental Biology.