A misfortunate incident of death of a teenage girl in a Mexican cave, 13,000 years ago turned out to be a miraculous day for scientists. The scientists managed to wheedle significant mysteries out of the oldest-known, well-preserved human skeleton in the New World.

Naia, one of the earliest inhabitants of the America has helped scientists decipher the link between ancestral and modern Native Americans. 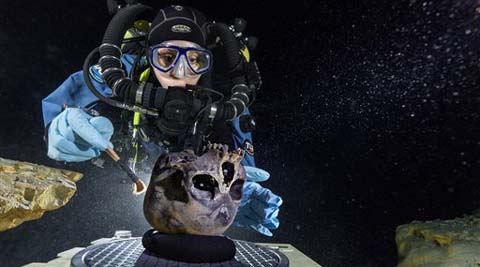 On Thursday the scientists performed genetic tests on her splendidly preserved remains discovered in 2007 by cave divers in an elaborate cave system in the Yucatan Peninsula have resolved questions about the origins of the Western Hemisphere’s first people and their relationship to today’s Native American populations.

The girl named Naia after a water nymph from Greek mythology was about 4 feet, 10 inches tall (1.47 meters) – is thought to have been 15 or 16 years old when she died.

Now, a team of researchers, including Professor Yemane Asmerom and Research Scientist Victor Polyak at the University of New Mexico’s Department of Earth and Planetary Sciences, have precisely determined the age of Naia’s skeleton.

These findings discovered that the Ice Age humans who first crossed into the America from Siberia arrived on the land bridge dubbed Beringia that linked Asia and the Americas some 20,000 years ago before sea levels rose did in fact give rise to modern Native American populations rather than hypothesized later entrants into the hemisphere.

“The challenge, to date, has been finding a fossil of an adult complete enough to do the morphology work, preserved enough to have mitochondrial DNA, while at the same time having appropriate material for dating,” Asmerom said.

Naia’s skull shape does not look like those of Native Americans, but the Beringian-derived mitochondrial DNA (mtDNA) D1 haplogroup (D1) directly shows her commonalities with modern Native Americans.

“This lineage is thought to have developed in Beringia, the land that now lies beneath the Bering Sea after its ice age occupants became genetically isolated from the rest of Asia”, explained lead author Dr. Jim Chatters.

This means that Paleoamericans and Native Americans descended from the same homeland in Beringia.

The divers coined the location where Naia was found as “Hoyo Negro” (Black Hole) in Spanish because of the hole’s vast impenetrable darkness.

The study was published in the journal Science was led by the Mexican government’s National Institute of Anthropology and History (INAH) and supported by the National Geographic Society.