You are here: Home / Tech & Science / Captured: Dust Factory Supernova To Reveal About Evolution Of Galaxies

Our universe is full of tiny solid particles ranging from the dark bands to the beautiful clouds. Galaxies are the most dusty places in the Universe. Scientists say the primary source of these dusts is the supernovas.

Scientists have captured some of the striking images of a young supernova brimming with fresh dust in the Chilean desert. This is for the first time that the astronomers have witnessed genesis of the grains forming galaxies. Scientists believe this will help them in understanding the evolution of galaxies in a better way.

“We have found a remarkably large dust mass concentrated in the central part of the ejecta from a relatively young and nearby supernova. This is the first time we’ve been able to really image where the dust has formed. This will help us to understand the evolution of galaxies,” said Remy Indebetouw, an astronomer with the National Radio Astronomy Observatory (NRAO) and the University of Virginia. 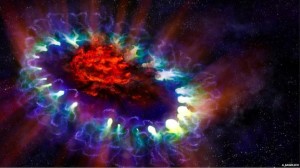 The images were captured by the Atacama Large Millimeter/submillimeter Array (ALMA) telescope.

A group of astronomers used ALMA telescope to observe the glowing patterns of supernova 1987A.

Supernova 1987A is present in the Large Magellanic Cloud which is a dwarf galaxy orbiting the Milky Way approximately 168,000 light-years from Earth.

The results will be presented in the meeting of the American Astronomical Society (AAS) later in January. It will also be published in the Astrophysical Journal Letters.