You are here: Home / Tech & Science / The Coral Reefs Highly Depend on Fish 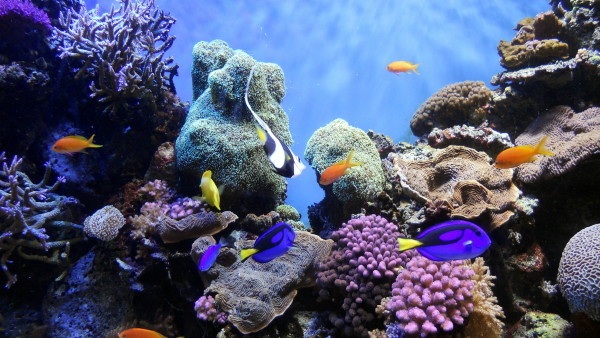 Coral reefs are diverse underwater ecosystems held together by calcium carbonate structures secreted by corals. They are built by colonies of tiny animals found in marine waters that contain few nutrients. Most of them are built from stony corals, which in turn consist of polyps that cluster in groups.

Polyps are usually tiny, but they can range in size from a pinhead to 12 inches (30 cm) across. Microscopic algae live within the tissues of polyps and provide organic nutrients that nourish the coral reefs.

An individual polyp uses both reproductive modes within its lifetime. Some mature adult corals are hermaphroditic; others are exclusively male or female. A few species change sex as they grow and they reproduce both sexually and asexually.

Co-authors Abel Valdivia from the Center for Biological Diversity in San Francisco and Courtney Cox of the Smithsonian Marine Station at Fort Pierce, Florida surveyed 143 species of fish from 110 sites across 43 Caribbean coral reefs. The findings proved that those with smaller fish had 50 percent fewer nutrients than those with more predatory fish.

The last ones used to have healthier levels of nutrients because fish hold a large proportion, if not most of the nutrients in a coral reef in their tissue. Researchers at the University of Washington School of Aquatic and Fishery Sciences mentioned that removing the big fish also means depriving the ecosystem of all those nutrients.

In 2015, Australian marine scientists identified “predictors of resilience” in coral reefs, which is the cause that aids coral reefs to survive large bleaching events. Among other factors, they noted that the density of coral polyps has a notable effect.

These creatures create an alliance with the tiny algae which line the polyps’ digestive tract. The algae then supply with an organic compound which helps the coral build huge calcium carbonate structures.