You are here: Home / Tech & Science / European Honeybees Are the Source of a Devastating Man-made Disease 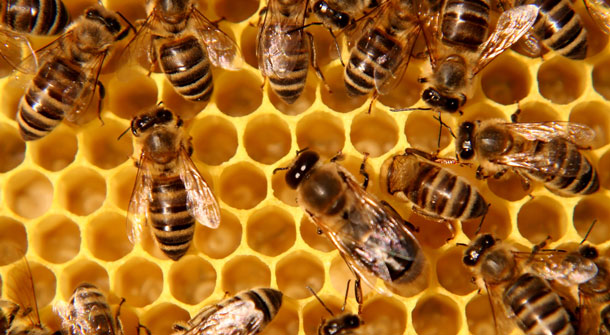 According to a team of U.K. scientists, the current threat on the lives and hives of wild honeybees is mainly a man-made phenomenon. This disease affecting scores of honeybees worldwide also has a negative impact on international trade.

New research shows that a recent outbreak of disease with the potential of devastating entire bee populations is “clearly linked to the human movement” of honeybee colonies around the world. Researchers urge stricter regulation that could protect the bees from such outbreaks, and other looming diseases.

Study author Dr. Lena Bayer-Wilfert of the University of Exeter explained that the new virus works hand in hand with the Varroa mite, representing a “double blow” for bee colonies. As a result, entire hives could be decimated and worldwide bee populations compromised.

According to Roger Butlin of the University of Sheffield, a fellow researcher of Bayer-Wilfert, the bee disease – known as Deformed Wing Virus (DWV) – is a serious threat to honeybee populations “driven by the trade and movement of honeybee colonies.”

On their own, the honeybee Apis mellifera – the ones responsible of carrying the disease – are not at all deadly to other bee populations. However, when they come in contact with the Varroa mite, the combination causes them to become deadly.

After the mite eats the bee larvae, the Deformed Wing Virus give the entire threat a finishing touch, resulting in a major wipeout of millions of honeybees over the past few decades.

U.K. scientists have studied genetic samples of Varroa mites and honeybees alike, with specimens coming from 32 cities in over 17 countries. By monitoring the DWV’s emergence, they were able to track the virus’ spread from Europe to North America, and even New Zealand.

According to their research, European honeybees are the source of a devastating man-made disease, with the findings supporting the idea that “DWV is the main cause for the colony losses associated with Varroa mites.”

Also involved in the study, Stephen Martin of the University of Salford, commented that discovering that the worldwide decrease in honeybee population is caused by the transport and sales of bees for crop pollination has to spur some change.

The study authors believe that stricter limits on global bee trading must be imposed, whether the bees are considered to be Varroa carriers or not. Beekeepers anywhere are encouraged to take drastic measures to control the Varroa mites in their bee hives.
Image Source: Pioneer Settler