You are here: Home / Tech & Science / The Plesiosaur Might’ve Swam Like A Penguin 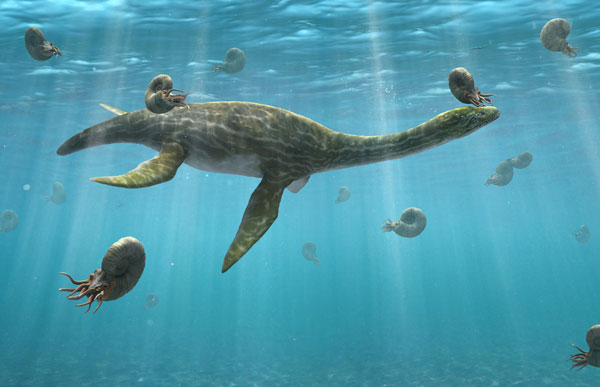 The Plesiosaur’s swimming has been a mystery

After two centuries worth of questions, researchers found that the plesiosaur might’ve swam like a penguin while it ruled around ancient waters. With its great size, long neck, four limbs, and sharp teeth, the Meyerasaurus, a type of plesiosaur, was the apex predator of the waters.

The now extinct species lived in the Jurassic and Cretaceous period, dwelling in the ocean and likely remaining as one of the top predators. However, how it swam has been a mystery for researchers and paleontologists. This was in spite of the fact that a near complete skeleton of the dinosaur was found back in 1824.

It has been an unsolved puzzle for a long time, but researchers believe they have found the answer on how the plesiosaurs swam through the waters. The team from the Georgia Institute of Technology and Nottingham National History Museum were able to design computer simulations of the animal. In fact, they were able to bring the dinosaur back to life and see how it moved and made use of its four limbs.

According to their findings, the most efficient and likely way of swimming for the plesiosaur was through using only its front flippers. It would flap them in a mix of swimming and rowing motion, similar to how penguins do in modern day. Much to their surprise, the computer simulations showed that its hind flippers didn’t actually aid in adding speed.

Instead, researchers believed that the back limbs were only used for steering or stability, like a rudder. It helped the dinosaurs in keeping course or shifting their direction. According to paleontologist Adam Smith, the front limbs provided a powerhouse for propulsion while the back limbs were more passive. However, the debate is far from over.

Other experts still doubt that the hind flippers had no use in swimming. Due to their large size, it’s believed that they could’ve been highly useful in navigating through the waters and catching prey. However, the new findings could shed some light on the matter, and forward debates.

It’s the first true estimation that has been made in the last 200 years. The plesiosaur was an ancient marine reptile that lived for around 135 million years. Certainly, it had had plenty of time to adapt itself to the best way of navigation possible. It’s unique body with four flippers have, thus, caused a bit of a debate among scientists. The research team believes that their computer simulations have flawlessly shown the most efficient way for the dinosaur to swim.