You are here: Home / Tech & Science / Birds Fall Head over Heels in Love for Each Other 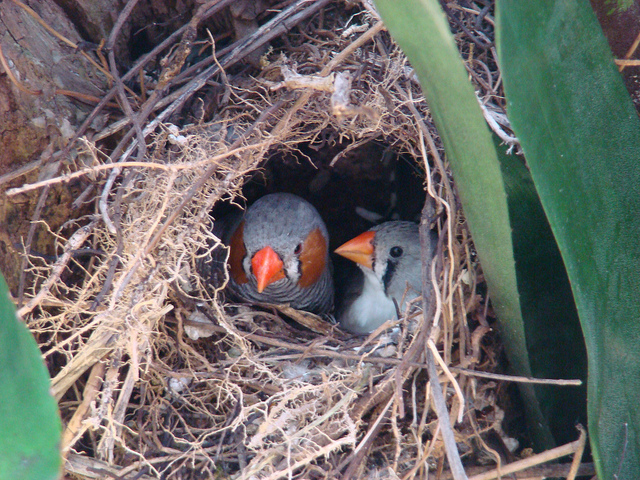 Zebra finch exemplars mate for life with one single partner.

A new study published in the journal PLoS Biology finds birds fall head over heels in love for each other. Scientists have observed the behavior of 160 Zebra finches, who are very similar to humans in that they mate for life and they share the responsibility of raising offspring.

Researchers at the Max Planck Institute of Ornithology have long noticed that Zebra finch exemplars establish long-lasting love bonds. Their goal for the current study was to determine how these birds choose their mates and whether their mating behavior is similar to the ones of humans.

The experiment involved 160 Zebra finch birds, which were divided into two groups, based on their mating behavior. 20 females were left to freely choose their partners out of a group of 20 males, whereas the other participants had to settle themselves with the pair that researchers had chosen for them.

The two groups were then left to breed and to attend their parental chores. Scientists have observed that the pairs that were freely formed were more caring towards their offspring. Moreover, a much bigger survival rate was registered among children of non-arranged couples.

According to statistics, 37% offspring of freely bonded pairs survived after the birth, whereas the arranged pairs lost great part of their chicks. The first couples also reproduced themselves more often and produced more eggs.

Male mates, who were chosen by researchers, were less emphatic with their partners. They did not pay enough attention to their new born offspring, which led to an increased percentage of dead chicks during the hatching period. During these 48-hour period fathers are supposed to pay more attention to the needs of their family members, a chore that none of the elected males has accomplished.

Significant differences were also noticed in point of romantic behavior. The males that did not freely bond with their female partners were more likely to cheat on their spouses, according to scientists’ observations. Females, on the other hand, were less willing to copulate than partners, who freely chose their mates.

In the end, it has been concluded that Zebra finch exemplars do not use the same mating strategies as other animal or bird species. Females’ choice varies, depending on their tastes and observers cannot guess what their intentions will be. When left to mate on their own, couples are more stable and have more offspring, researchers have concluded.