You are here: Home / Tech & Science / Fish Swim towards Evolution against Trawlers 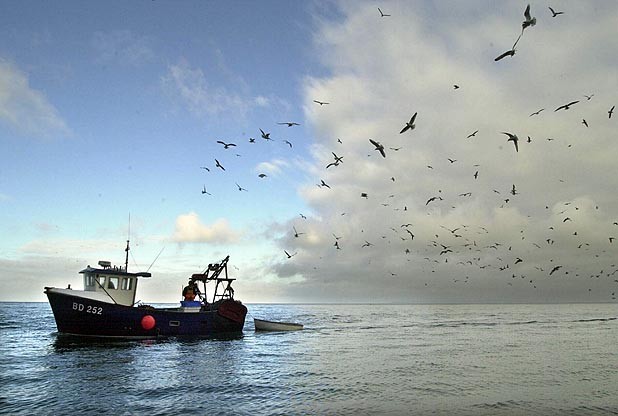 New research adds evidence to the fact that fish are evolving to combat hunting by humans.

A new study has found that fish swim towards evolution against trawlers – it’s true, the little fishes are effectively developing new ways of fighting human capture. They may not seem that ingenious, or at all smart, but behind those blank stares, there is an adaptation mechanism that’s functioning very well.

UK researchers from the University of Glasgow have used experiments in the laboratory to uncover what are the most common traits of fish being caught by nets. Their results showed that those fish who swim faster can easily escape trawler men’s grasps. Obvious as it may be, not all fish have this distinct ability. It’s not just about being able to swim faster, but about producing bursts of speed that also allow for great maneuverability.

And the weird part was that within the same species, some fish had the ability while others did not.

Shaun Killen, the lead author of the study, has said that their main goal was to observe physical differences between all fish that they were working with. Furthermore, they planned to correlate these physiological traits with each individual fish’s likelihood of being captured.

The research began from the idea that fish don’t just evolve into being faster, but have distinct issues that can be resolved if some traits were to be enhanced. Like speed. And the most likely cause of an evolutionary change for many animals is obviously human hunting habits, and the fact that we select what we hunt, looking for certain traits.

This was all suggested by a good amount of previous research. The aim of the current one was too prove them true.

The actual experiments carried out by the team implied simulated trawls. The scientists decided on wild minnows as the perfect control group for the research. They found that there were constant variations between some fish. One part of the schools were always being captured by the nets, while another always managed to escape.

Analyzing the two groups of fish, the team led by Dr. Killen observed that there were differences not necessarily in speed, but in acceleration, that made the fish more or less vulnerable to the fishing net. Some fish were fast, but were not quick enough jump out of the way of the net. Others were not necessarily as fast, but could easily move out of harm’s way as they could produce bursts of speed. Killen compared them to Olympic long-distance runners versus Olympic sprinters.

This newest research further emphasizes the idea that excessive hunting of a single animal in a specific area can lead to it developing ways of defending against it over generations.