You are here: Home / Tech & Science / Illusionist Lizards Really Walked On Water In The US 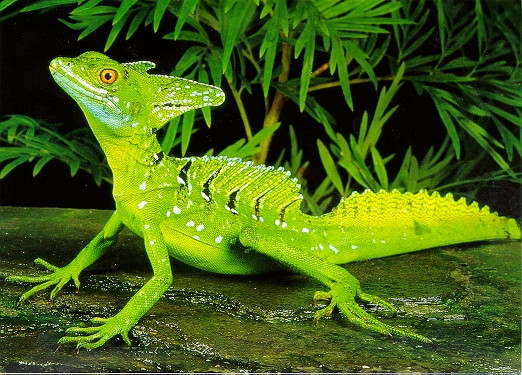 Unlike modern day human illusionists, a species of lizards does not need smoke, mirrors, invisible wires or thin plates of glass in order to appear like they’re walking on water. They just do it.

The scientific community has taken to calling the creature “Jesus Lizard”, however its official name is Basiliscus, which translates to “older male cousin”. Modern-day versions of the lizard can currently only be found alive and well in Mexico and Colombia, but a 48 million year old fossil has recently been found in Wyoming, indicating that the species once made United States land its home.

What’s unique to the Basiliscus is that it runs with a speed that reached 65 miles per hours, and developed a one-of-a-kind slap and stroke gait that allowed it to basically walk on water. The technique involves the animal using its forward foot to slap down on the water hard enough to create a force that keeps it from sinking, while at the same time sweeping back in order to provide momentum.

Experts say that the animals are so fast, that you are not physically able to approach them. You can only hear them around you, splashing across the surface of the water.

Jack Conrad, fossil expert over at the American Museum of Natural History and assistant professor specialized in anatomy over at the New York Institute of Technology College, gave a statement saying that this is a remarkable discovery which could help researchers better understand how tropical species adapt to climate change.

This is especially important in today’s context as Conrad went on to add that “Given our current period of global climate fluctuation, looking to the fossil record offers an important opportunity to observe what is possible, and may give us an idea of what to expect from our dynamic Earth”.

For his study, published earlier this week, on Wednesday (July 1, 2015), in the journal PLOS One, the paleontologist looked at a skull discovered back in 2008, in Wyoming, at the Bridger Formation. The fossil may belong to the earliest member of the Corytophanidae group, which includes the iguana and the chameleon.

The researchers stress that the fossil does not simply link the creature to this group as a distant relative, but that it establishes it as a full blown member of said group.

Projections of the past have revealed that the “Jesus Lizard” most likely seeked out warm temperatures in the past as well, as prehistoric Wyoming was roughly 16 degrees warmer when the species used to live there. Conrad also theorized that the lizard might’ve migrated to the south as the climate in its original habitat started to cool down.

The expert says that the 48 million year old creature hunted during the day and spent most of its time in trees. The skull had a nice set of teeth on it, which led Conrad to believe that the Basiliscus had a diet which consisted of snakes and other lizards, as well as insects, fish and plants. There is a working theory that the reptite may have even eaten some animals that were larger than that due to the size of its cheekbone.

The species generally grows to be roughly two (2) feet long, and its skull is adorned with a ridge of bone that only makes it look ferocious, but also protects its eyes.