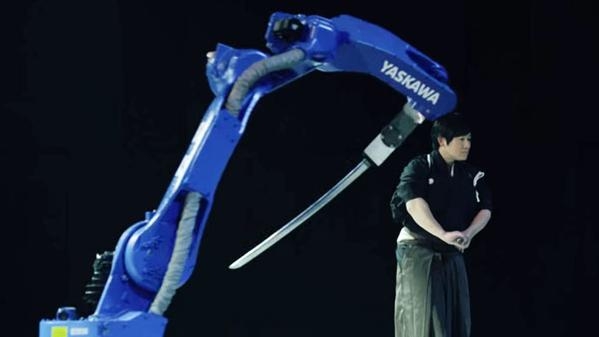 After years of researches and tests Yaskawa Electric Corporation unveils the first robot samurai during an attention-catching live demonstration. The event took place this weekend as the company wanted to promote its recent achievements in point of human robots.

Japanese companies have always showed a particular interest in robotics. Yaskawa Electric Corporation makes no exception to this rules as the company has spent the last years studying the mechanisms of robots in an attempt to unveil the first robot samurai.

The objective was reached at the beginning of the week when the Japanese firm put their most recent creation to tests. The entire demonstration has been carefully documented and the video was posted on the company’s official channel.

Judging from the footage, it is safe to assume that sword masters have just found their strongest competitors: robot samurais. The latter can accurately imitate all the moves that professional sportsmen perform. Moreover, the robot has registered better results at times, proving that a robotic hand is sometimes steadier and more resistant.

The video begins by introducing us to the master swordsman Isao Machii, who has won numerous international championships. His rival, the Motoman-MH24 290kg industrial robot developed with the help of the Yaskawa Bushido Project.

Without too many introductions, the two players began unveiling their weapons and their fight tactics. Thus, the robot samurai proved that he is capable not only of imitating the master’s movements, but also of producing his own praise-worthy movements.

There were four types of cuts that the machinery had to reproduce from its master, namely, the diagonal cut, the rising cut, the horizontal cut and a brief endurance test presupposing the cut of one thousand pieces.

As expected, humans’ touch was more precise than the mechanical movements of the robot. The clear difference was made during the horizontal cut when the human samurai cut an orange in two perfect halves. Even though the robot cut five pieces of oranges, the results were not as accurate as the ones of Machii.

There was one particular task where the machine proved itself by far better than the man and that was during the endurance test. Both Machii and the robot had to execute 1,000 cuts, but the bionic person didn’t seem to encounter any physical challenges in accomplishing its task. The master swordsman, on the other hand, was visibly exhausted, but he nevertheless, carried the task through.

Spokespersons of the Japanese company have been the first to announce the introduction of the new robotic samurai arm. They have told the press that the project has been developed during the past months. Engineers have chosen a samurai machinery because they think the movements of the masters are the most precise.
Image Source: Yibada.com