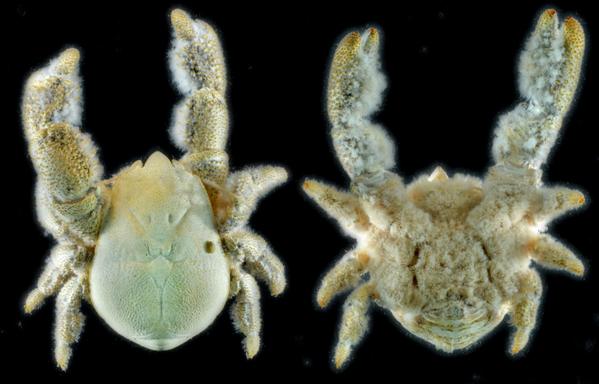 The Yeti is real, but it’s a crab. It’s a blind, hairy, and heat loving crab species that somehow has managed to make a comfortable home for itself in Antarctica’s cold and hostile environment.

Is survives in the ocean floor by staying close to thermal vents (volcanic rock systems), as hot water gushes over into the sea and makes the habitat appropriate for its members. Researchers with the University of Southampton (England) have found several such communities, and they’re not just surviving, but thriving and ruling as the dominant species in these spots.

In fact, the thermal vents are so welcoming to the animals that the researchers found no less than 700 individual members per square meter, some even sitting on top of each other.

Experts have dubbed the species Kiwa Tyleri, an homage to Paul Tyler, a renowned polar and deep ocean biologist from Great Britain. The marine creature was first photographed back in 2010, with the help of a remotely operated submersible vehicle (ROV). It was found living at 2.000 meters under the ocean, in the East Scotia Ridge.

As an added bonus, the vehicle did not just provide scientists with photographic proof of the species, but also scooped up a few specimens that researchers could further analyze up close.

For the past five (5) years, field experts have been gathering data on the Kiwa Tyleri with the help of genetic sequencing as well as computed tomography scanning (CT scanning). They were finally ready to publish their findings earlier this week, on Wednesday (June 24, 2015) in the journal PLOS ONE.

Dr Sven Thatje, lead author and associate professor of marine evolutionary ecology over at the University of Southampton gave a statement to BBC saying that “The entire belly of the crab is covered in setae that are designed to brush up and harbor bacteria on a large scale”. It’s because of this feature that the animal has also been nicknamed “The Hoff” as a reference to David Hasselhoff, an old US actor with a notoriously hairy chest.

But unlike the actor’s, the crab’s hairy chest serves a purpose as its host bacteria that the animal farms and feeds on by scraping them with some mouth parts that are shaped like a comb.

Biologically specking, the Kiwa Tyleri is made to live in the volcanic rock systems as the creature has some spines on its legs, which makes it able to effortlessly climb the chimney-looking structures which are commonly found in these spots. What this means is that the crab species has no trouble whatsoever reaching the position where it can maximize its conditions for food production.

Dr Thatje informs, however, that the creature is a very calculated one. It needs to be in order to survive in its environment. It is trapped in a very small space where the water is the right temperature for the species to live in it, and if the animal moves one step too close to the thermal vent it will be greeted by some of the coldest temperatures found in seawater.

The working theory is that the yeti crabs originated in the Pacific Ocean, then migrated towards the east, toughly 10 to 20 million years ago.

The Kiwa Tyleri is the third yeti crab species to be discovered, right after the Kiwa Puravida and the Kiwa Hirsute.