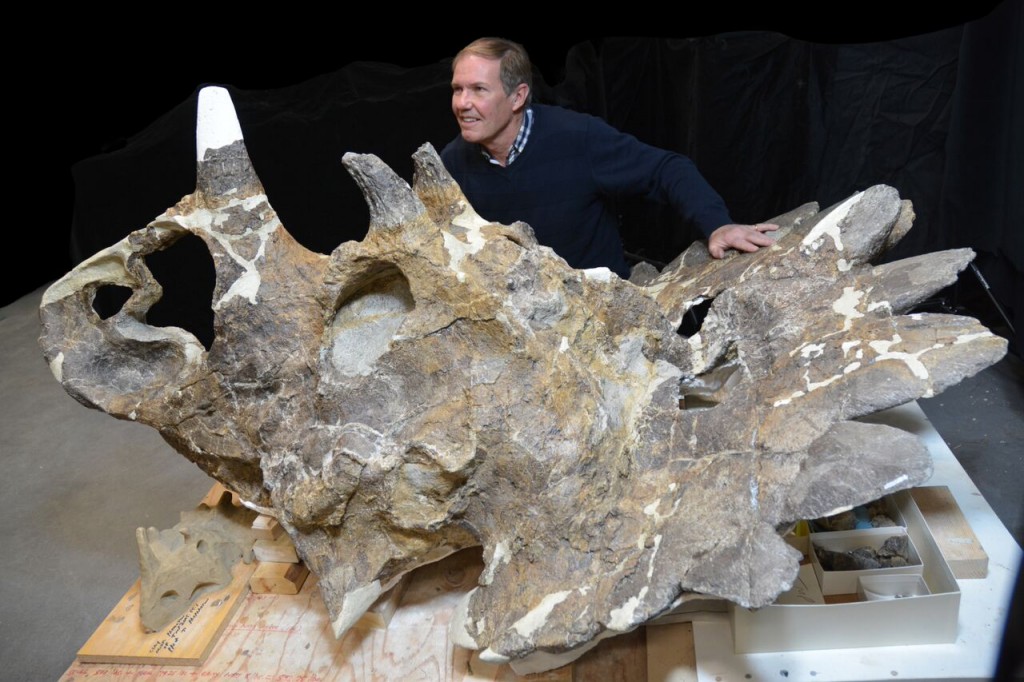 Hellboy is said to belong to the Triceratops family of dinosaurs. Scientists ground their thesis on the three head horns and the bone plate of the newly-found dinosaur.

Scientists may be a long way from uncovering all the mysteries of the previous eras, but one thing is for sure, they have experience humanity’s most romantic moment. They have found the Geekiest Marriage Proposal – Paleontologist Proposed in Research Paper on Horned Dinosaur “Hellboy”, recent reports have stated.

Caleb M. Brown of the Royal Tyrrell Museum of Palaeontology in Alberta, Canada might have long nurtured a loving feeling for his research leader, Lorna O’Brien, but didn’t find the right time to say it to her, while the two worked together on a research paper about newly discovered dinosaur “Hellboy”. With his heart in his hand, the paleontologist proposed to his co-worker in his research paper on the horned dinosaur, “Hellboy”.

The love declaration was described as one of the geekiest marriage proposals of all times and yet, it has managed to melt the hearts of all scientists. As Brown wrote about his science colleague he suddenly interrupted the presentation on the newly found species of “Hellboy” dinosaur to ask: “Lorna, will you marry me?”

The paper was published in the journal Current Biology on Thursday and the entire science community was breathless until Lorna’s answer was finally disclosed. It appears that the leader of the research group has been deeply impressed by the marriage proposal in the science journal. She replied with an unhesitating ‘Yes.

As for the new species of dinosaur that has been recently found, scientists claim that the species belongs to the family of the Triceratops. It has been nicknamed “Hellboy” after the three horns on the head of the pre-historic animal and the protruding bone plate on his back, scientists have explained.

The new genus was identified a decade ago, but further researches were necessary in order for paleontologists to pinpoint its characteristics. The first traces of the dinosaurs were discovered in the region of Albertina, several years ago. Experts unearthed back then an intact skull belonging to the horned dinosaur, thus, setting the grounds for the following research works.

The official name of the dinosaur species is Regaliceratops peterhewsi. It may be officially translated as “royal horned face”, a well-inspired name considering that the bone plate of the prehistoric animal resembles a royal crown.

Paleontologists distinguished between this newly-found genus of dinosaur and the well-known Triceratops by closely studying the structure of the three head-horns. They have concluded that Hellboy’s horns are somewhat smaller than the ones of the Triceratops.

Scientists will continue investigations in the following period to find out new characteristics of the dinosaur species. They will most likely reconstruct the dinosaur skull using digital programs.
Image Source: National Geographic