You are here: Home / Tech & Science / Gravitational Lens and the Universe’s Own Groundhog’s Day 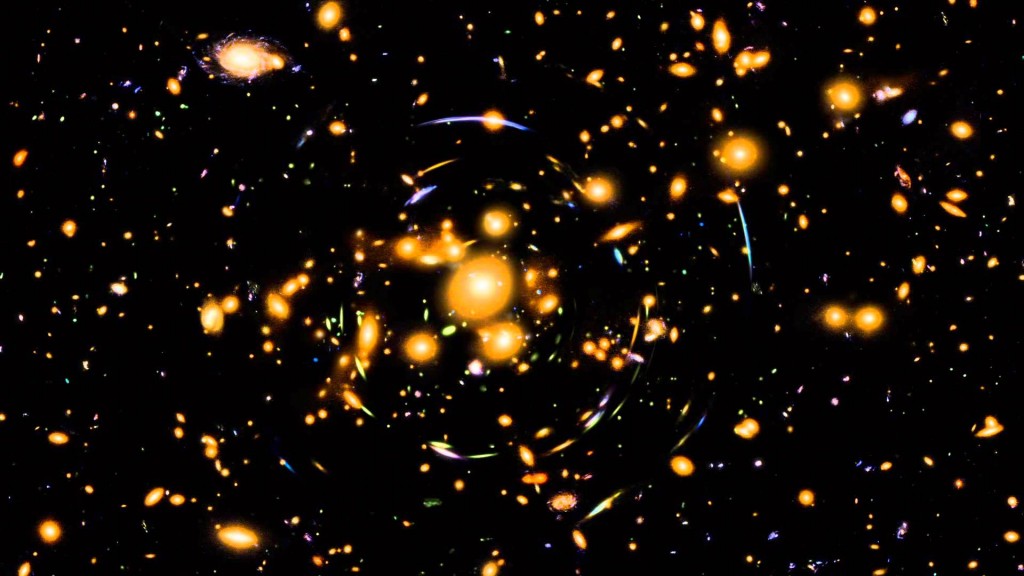 The classic 1993 Bill Murray movie presents the story of a man who lives the same day over and over. This time, however, the phenomenon happened on a much larger scale. Scientists witnessed the most magnificent – or should I say magnifying? – event, when they saw the same star exploding four times.

The phenomenon was possible thanks to a galaxy located between the explosive star and Earth, creating the special effect of a cosmic magnifying glass. Scientists were able to catch a small glimpse into the way stellar deaths occur and how they contribute to the nature of the accelerating universe.

Using the Hubble Space Telescope, astronomers captured four different images of the same supernova explosion. It was possible due to a galaxy cluster warping the fabric of space and time around the star, acting like a bowling ball covered in a bed sheet.

Patrick Kelly, astronomer at the University of California, Berkeley, and chief author of the study, is proud that he could witness a phenomenon predicted 50 years ago. Before this, no one could find an example for a gravitationally lensed supernova.

The supernova was discovered on November 11, 2014, and it is rather far from us, even in terms of cosmic distances: more than 9 billion light-years away from Earth, almost on the edge of the observable universe. The researchers who found it decided to name it SN Refsdal, honoring the late Norwegian astrophysicist Sjur Refsdal, one of the earliest pioneers in the gravitational lensing studies.

Co-author Jens Hjorth, chief of the Dark Cosmology Centre at the Niels Bohr Institute at the University of Copenhagen, explained in a statement that because of the odd phenomenon of gravitational lensing, the supernova seems to exceed its normal brightness by 20 times.

The galaxy acting as cosmic lens is located in a massive cluster of galaxies 5 billion light-years from Earth. Back in 2009, a team of astronomers captured the largest known image of a spiral galaxy ever seen through a gravitational lens.

Because light is unpredictable and takes such numerous paths through and around gravitational lens, it arrives on Earth at different times. Therefore, the four images we have of the supernova explosion were captured separately during several weeks.

Gravitational force can act as lens

Gravity appears when matter messes with the fabric of reality. If an object has a great mass, more space-time curves around it, creating a stronger gravitational pull. This discovery is treasured in Einstein’s theory of general relativity, which celebrates this year its 100 birthday.

As a result of this phenomenon, gravity can also act as lens, magnifying the galaxies located behind powerful gravitational fields.

The discovery of gravitational lensing in 1979 was a great help for astronomers, who can now observe galaxies and features that would otherwise be too faint and distant, even for the most professional telescopes. Kelly calls them “nature’s magnifying glass”, enabling astronomers to look through galaxy clusters and get magnifications of up to 100 times.

That’s why the four images captured of SN Refsdal are so groundbreaking, because they mark the first time when astronomers could witness a supernova through strong lensing. The exploding star displayed a beautiful “Einstein cross”, which forms during the strong lensing phenomenon.

Gravitational lensing and the expansion of the Universe

Scientists have developed a computer model of the lensing cluster, and they found out the data shows astronomers missed the chance of observing the lensed supernova twice: once 50 years ago, and once 10 years ago. But it is not great pity, since the model suggested that within 10 years, new images of the supernova explosion will appear.

The occurrence of the supernova images is conditioned by the gravitational pull of the galaxy generating the gravitational lens. By timing such occurrences, astronomers hope to be able to observe the pattern of the visible normal matter and invisible dark matter within the lensing galaxy.

Dark matter is currently in the top of science’s greatest mysteries, a substance thought to be responsible for five-sixths of the universe. Kelly believes that studying dark matter and the way it behaves inside a gravitationally lensing cluster might help researchers understand a bit more of the mystery that is dark matter.

The new discoveries could also help astronomers pinpoint the rate at which the universe is expanding, by analyzing the timings of the images. There are several methods currently used to determine this rate, but this might be a new technique, and applying it might affect the way we perceive universe expansion. So far, there hasn’t been one method to obtain universal agreement in the astronomy department.