The widow of Neil Armstrong, the first human to set foot on the Moon’s surface, recently announced that she found a cloth bag full of Appolo 11 souvenirs taken back to Earth by her husband when the lunar landing mission was over 40 years ago. The bag was found after Armstrong’ death in a cupboard at his home.

Among the mementos found in the bag, the most precious artifact is the 16mm DAC camera, which was used to film Armstrong’s “one small step” on the Moon along with other historical images such as the deploying of the U.S. flag on the lunar surface, or images of Armstrong and Buzz Aldrin’s first moonwalk.

I received an email from Carol Armstrong that she had located, in one of Neil’s closets, a white cloth bag filled with assorted small items that looked like they may have come from a spacecraft. Needless to say, for a curator of a collection of space artifacts, it is hard to imagine anything more exciting,”

said Allan Needell, employee of the National Air and Space Museum in Washington. 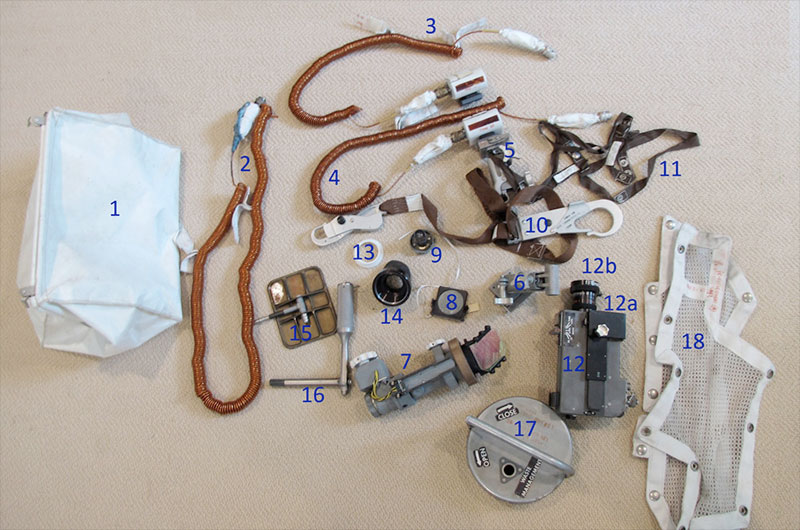 Mr. Needell also reported that inside the cloth bag (marked as no.1 on the photo above) he found seventeen Appolo 11 artifacts, including a training photo of Armstrong in a lunar module simulator, his waist tether (no.10), helmet tie-down straps (no. 11), an emergency wrench (no. 16), and the cover to the waist management container (no. 17).

But the icing on the cake was the 16mm data acquisition camera (no. 12) used to capture the full footage of the moon landing on July 20, 1969. This camera allowed us to see Armstrong’s “one small step” on the Moon, the planting of the U.S. flag, and Armstrong going down the ladder of the moon module.

However, no film was found in the camera since the cartridges were taken back to NASA when the mission was over. But Mr. Needell said in an interview that the camera alone, given the images that it had captured, “ranked as enormously important.”

The white cloth bag found in the cupboard by Carol Armstrong is known as “McDivitt purse”, and it was supposed to be left in the lunar module along with all the mementos and be destroyed. However, it seems that Armstrong decided to take back home the items for sentimental reasons.

That (is) just a bunch of trash that we want to take back – LM (lunar module) parts, odds and ends,”

commented Michael Collins, the pilot of the Command Module, when Armstrong told him about the bag on their way back to Earth.