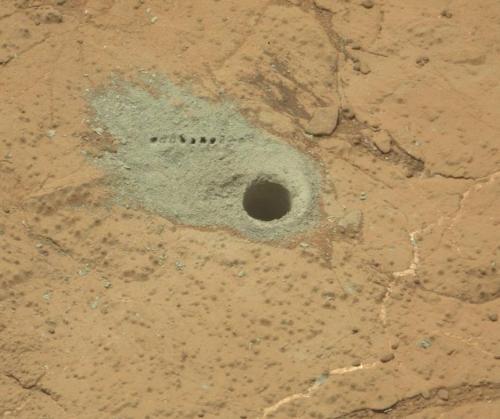 NASA’s Curiosity Rover, which has been examining and investigating the Mount Sharp, located on Mars, found evidence suggesting the red planet might have had acidic waters. Its most recent mission acquired a critical sample from the mountain by employing a unique drilling method. The specimen originated from a particular rock dubbed Mojave 2 that might hold some hints about the old Martian environment.

Prior to this, Curiosity tried to get specimens from Mojave 2 but eventually broke the sample, and it was no longer possible to convey it to the rovers’ scientific tools. What led the mission group to become so determined to discover water on Mars is the finding of a lot of jarosite, a sulfate mineral that develops in acidic climates. This site appears to display acidic conditions contrasted to others found in various Martian drilling locales.

NASA researchers are still pondering if this acidic water was more easily distinguishable at the Mojave 2 because of past natural conditions. For them the question now is whether the mountain was shaped by sediments pilling up or by the retreat of acidic water which used to cover the area.

The success in acquiring this new specimen can be ascribed to a new and softer drilling process, as indicated by John Michael Morookian from NASA’s Jet Propulsion Lab. He noted that this is the first time when such low percussion instruments were utilized on Mars to preserve energy.

Curiosity initially employed a drill comprising of a hammer and a chisel. The drilling rate was optimized so as not to hit too hard the rocks.  Even so, researchers discovered that when Curiosity gets rock specimens, it utilizes so much power that it smashes the rocks. This new method relies on a moderate, steady pace at a low percussion rate.  Curiosity took 10 minutes to drill 2.6 inches into the delicate Mojave 2 rock. After this effective mission, the rover will go ahead to gather different samples from different sites around the mountain base before it climbs higher on Mount Sharp.

“Our initial assessment of the newest sample indicates that it has much more jarosite than Confidence Hills.”

Confidence Hills was the region of first specimen of the Mars probe. The area is part of “Pahrump Hills,” which is in turn part of Mount Sharp. The speculation set forward by the Curiosity’s group suggests that the mountain started with piles of silt as lakes filled and dried. Mount Sharp is similar to Mount Rainier in Washington State in terms of size.