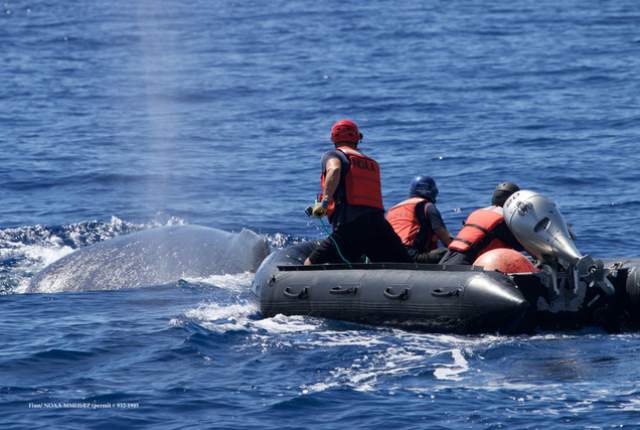 On Friday, a rescue team managed to free a 45-ton humpback whale that had caught its tail in a heavy crab line and had been dragging it around in the Hawaii waters for more than a week.

The Hawaiian Islands Humpback Whale National Marine Sanctuary’s management reported that the team used a knife attached to a long pole to perform the daunting task.

According to the sanctuary’s administration, the divers were able to get close to the gigantic mammal in an inflatable boat near the coast of Maui. The mission was far from safe since the animal seemed restless and less likely to co-operate.

Ed Lyman, coordinator for the sanctuary’s Large Whale Entanglement Response team, reported that the previously entangled humpback whale was currently swimming free. Only a small piece of the crab line remained attached to one of its wounds, but it will soon fall off as the bruised skin will heal, Mr. Lyman added.

The humpback whale was first reported as having an entangling issue on February 13, nearly 45 miles off Hilo’s coastline in the northwest region. A team approached the whale, recorded its condition and attached a GPS tracking logger to it.

During the past week, the West Hawaii Marine Mammal Response Network had been monitoring the whale and its exact position via a satellite system.
However, the 45-ton mammal vanished from sight until Sunday, Feb. 25, when it was again spotted but this time dragging a buoy along the Kona Coast.

The sanctuary found it incredibly hard to intervene since the whale was heading to an area with lots of marine currents which was impossible to reach by an inflatable boat.

Last Monday, the sanctuary’s administration announced that it will resume the rescue mission when the weather conditions would improve. From Tuesday to Thursday, the whale was located circling the Big Island. On Thursday evening, it reached the Maui’s southern shores.

The next morning, a rescue team had finally set off on their mission. The National Oceanic and Atmospheric Administration (NOAA) reported that when the crew members reached the distressed whale, they found that its tail was tangled in more than five wraps of crab line.

The divers attached additional buoys on its tail to keep the animal from diving while they were trying to cut the wraps. They said that the whale didn’t suddenly trash its tail, which meant that it wasn’t stressed. But…

It definitely wasn’t happy with us being there. It didn’t understand,”