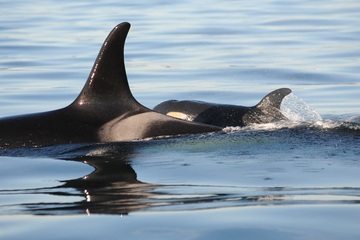 New hope for killer whales emerges as  a newborn orca was spotted in the Pacific Ocean’s inlet known as Puget Sound on the 30th of December. This unusual sighting was made by one of the Center for Whale Researches top scientists, dr Ken Balcomb. Now the baby orca swims off the coast of Washington state. Thought to be older than a week now, this newborn is a new hope in more than two years. Sightings like this are rare. According to NOAA (National Oceanic and Atmospheric Administration), about 35 percent to 45 percent of newborn orcas lose their life before the age of 1.

On the early days of December J-32, a 19-year-old pregnant female whale, passed away around the Strait of Georgia. Scientists, including Ken Balcomb, drew her ashore. A necropsy on J-32 was carried out. The results showed that the whale had miscarried. This triggered a bacterial infection which caused the death of J-32. Wildlife biologist Brad Hanson with the NOAA said that

“We lost a lot of reproductive potential,” and “The loss of J-32 was a disturbing setback.”

The name of the newborn orca is J-50 and its mother is not known. Ken Balcomb said that two potential candidates are J-16 and J-36. J-16 is a 43-year-old female. She had three calves that survived and J-50 can be her calf. J-36 is another candidate for being the mother of J-50. She is a younger female and this could be one of her first calves. J-50’s dorsal fin and back have marks that scientist said it could suggest a remarkable fact: its delivery was assisted by another whale. J-50 is also the 78th orca of the population on the coast of Washington state and Canada.

Killer whale groups are noticed all around the world. In the United States and Canada this precise group of killer whales is viewed as an endangered species. According to Brad Hanson, a wildlife biologist with the National Oceanic and Atmospheric Administration, an important part of the problem that led to this result for the killer whale group is the taken for captive display during the late 1960s and early 1970s.

Over half of the population (a number of at least 40 killer whales) was taken from their natural habitat. In the 1990s the population increased to almost 100 whales. A decline of 20 percent was registered in the early 2000s. United States acted by listing the group as endangered in 2005.
Image Source: Live Science