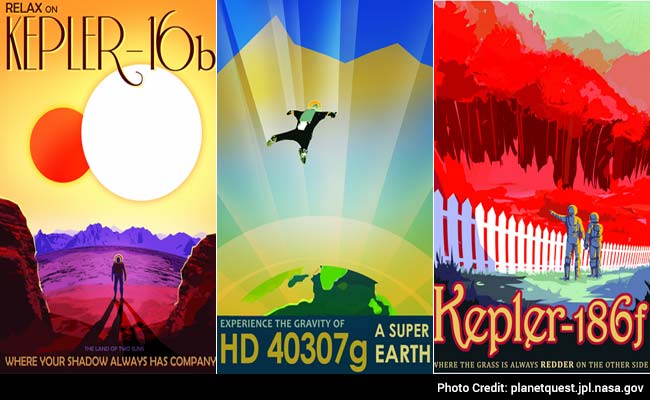 Last month, NASA released a series of vintage travel posters depicting three of the nearly 5,000 planets found by space telescopes outside our solar system. The release may celebrate NASA marking a recent milestone – Kepler telescope has spotted its 1,000th exoplanet.

In those bright colored posters, NASA seems to invite space travelers to visit the three extra solar planets, or exoplanets. Travelers are lured with each exoplanet’s most tempting trait, such as red grass, two suns in the sky, or a very strong gravity.

For a winter gateway, exoplanet Kepler-16b is the most suited since it has two suns. In the NASA poster, Kepler-16b is depicted as an Earth-like planet, but scientists believe that it may also be a gas giant. So, the info is not exactly accurate. The planet is resembled by the artists with Tatooine, Luke Skywalker’s home planet that also orbits two suns.

The Exoplanet Travel Bureau, a fictional space traveling bureau, invites space travelers to visit and relax on Kepler-16b, a planet “where your shadow always has company.”

HD 40307g, an exoplanet discovered in 2012 by a European telescope, has also an inspired vintage poster. The fictional travel bureau recommends it to passionate skydivers since it has a stronger gravitation than our own. NASA experts guess that HD 40307g is either a Super Earth (twice as big as the Earth) or a “mini-neptune.” Additionally, HD 40307g may support life. Travelers are invited to experience “the gravity of a Super Earth” on this exoplanet. However, they will need also a lot of patience to get there since the planet is located at 44 light years away.

The third exoplanet that has its own travel poster is Kepler-186f, an exoplanet discovered last year. NASA scientists believe that this planet can also host life since it was discovered in the habitable zone of a star. NASA believes that it may have water on its surface and plant life. However, the red-wavelength photons reaching Kepler-186f’s surface would make plants look rather red than green. The Exoplanet Travel Bureau has even a slogan about this remote planet: “Where the grass is always redder on the other side.”

The inspired travel posters were created by three artists – David Delgado, Joby Harris and Dan Goods in an art-deco style, bright colors and classic design just like the posters in the golden age of space travel were designed.

The artists said that they had felt inspired by the numerous exoplanet discoveries which had made them feel as if SF scripts were becoming reality.

It feels like we’re living in the future, or science fiction is coming to life. We thought it would be really cool to explore the characteristics of each planet through the context of travel,”

The artists also promised that they would create more exoplanet-related posters in the coming months. So, stay tuned.