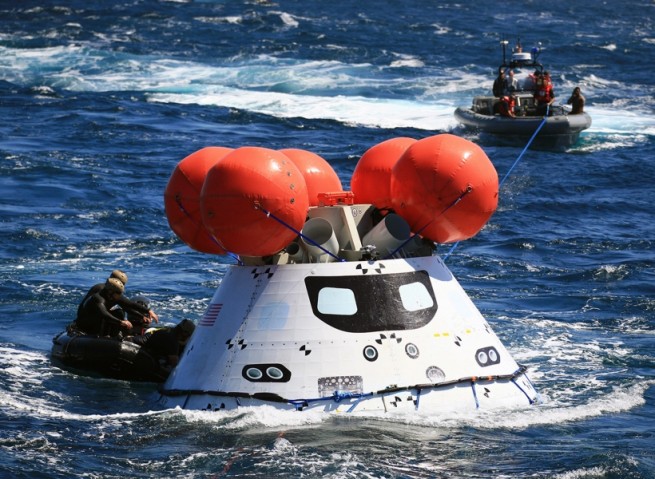 NASA scientists breathe easy after Orion aces first flight test on Friday morning, marking yet another historic moment in space exploration. The capsule, undergoing its first robotic test flight, also had a perfect touch-down when splashing into the Pacific Ocean.

On its way back to Earth, the cone-shaped capsule reached temperatures as high as 4,000 degrees Fahrenheit because of the heat of atmospheric re-entry. According to Rob Navias, NASA spokesman, Orion is the country’s new spacecraft and represents the golden spike in America’s attempts at future space exploration.

After re-entering the atmosphere, the Orion capsule hit the water approximately 275 miles off of the Californian coast. Orion was soon brought home as recovery ships set out to ensure its safe return.

This spectacular finale came only four and a half hours after Orion’s liftoff from the Air Force Station. Engineers had to postpone the launch on Thursday, as gusts of wind as well as an uncooperative fuel valve forced the rocket to remain grounded.

Mike Curie, the launch commentator announced that the rocket had had a “liftoff at dawn” as the rocket began speeding off from the launch pad at 7:05 a.m. ET. Parts of the spacecraft began peeling away as engineers had planned while onboard cameras were capturing stunning footage of our blue planet.

Charles Bolden Jr., NASA administrator was thrilled to announce that Orion’s launch had marked the first day in the Mars exploration era. After two laps around Earth, Orion returned home. NASA’s plans with the spacecraft are ambitious: Orion is supposed to take astronauts to one of the asteroids close to Earth in the 2020’s. After this trip, astronauts will be flown to Mars in the 2030’s.

Friday’s mission marked the first step in a series of deep-space exploration endeavors and was dubbed Exploration Flight Test 1.

Both the rocket and the capsule performed excellently throughout Exploration Flight Test 1, NASA officials reported, and, at 10:11 a.m., after reaching the top of its orbit, Orion began its descent. At approximately 20,000, Orion experienced approximately 80 percent of the speed that a normal spacecraft would encounter when returning from the moon. This might be particularly tricky, especially since Orion’s peak acceleration was 8.26 G’s, significantly higher than the 3 G’s that astronauts usually experienced during the space shuttle era.