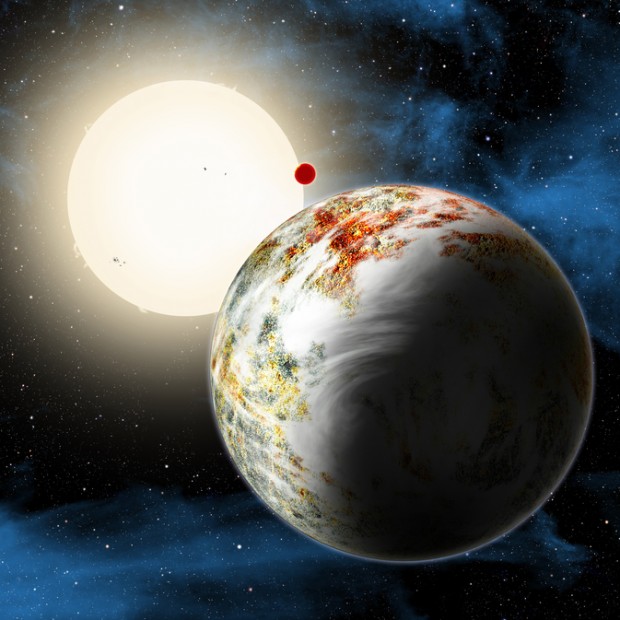 An international team of astronomers discovered a planet orbiting a Sun-like star in the Cancer constellation by using a ground-based telescope named the Nordic Optical Telescope. It has a total length of 2.5 meters and is located in the Spanish archipelago Canary Islands at the Roque de los Muchachos Observatory. This was the first time when ground-based telescopes were used in detecting and observing the transit of a planet. Until now, only space-based telescopes had the capability of detecting planets transiting by bright stars.

The team of scientists that measured the transit of 55 Cancri e now plans to look for signs of water vapors in the planet’s atmosphere. Studies show that the planet makes one complete orbit around its sun in 18 hours which suggests that the planet is very close to its Sun-like star. Due to this fact daytime temperature can reach 1,700 degrees Celsius, thus 55 Cancri e is not inhabitable at all.

Scientist say that 55 Cancri A can be seen with the naked eye during a clear and moonless night. This planet was discovered in 2004 by an American astronomers team in Texas also by using a ground-based telescope.

In 2017 NASA is scheduled to launch the TESS mission (Transiting Exo-planet Survey Satellite) and in 2024, the European Space Agency will launch the PLATO mission (Planetary Transits and Oscillation of Stars). Both missions will have the same purpose : finding terrestrial planets transiting nearby bright stars. During these missions a number of small extra-solar planets are expected to be discovered.

Dr. Ray Jayawardhana, the co-author of the study explains that such observations are essential to astronomers because they pave the way for further research looking into life on other planets. It is true that remote sensing is no easy task, he adds, especially when the planets in question are tens of light years away, however, ingenuity and technique allow even these difficult observations to be made.