You are here: Home / Tech & Science / The Mystery of Titan’s Magic Islands 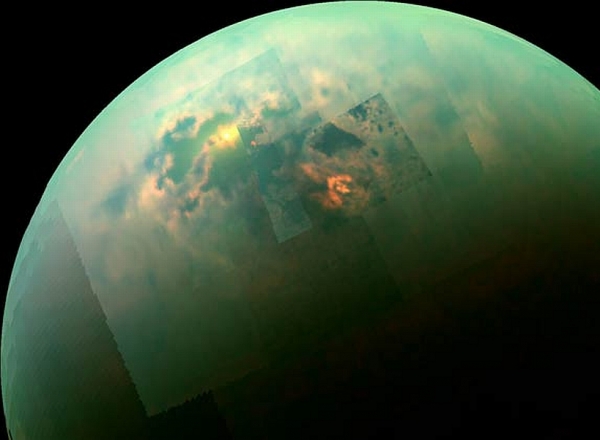 Titan’s magic island mystery has just become more interesting after two new such islands were observed by astronomers. Last year, a strange bright feature was seen by scientists in Ligeia Mare sea, the second largest body of liquid on Saturn’s biggest moon. This bright island was photographed in May however, in July it disappeared, only to reappear a year later.

“They just popped up,”

Alexander Hayes said in a briefing of the American Astronomical Society’s Division for Planetary Sciences.

Titan is the only body in the solar system, besides Earth, to present rain-carved geography. Because of this feature, scientists were intrigued enough to investigate further. As Hayes explains, Titan is the explorer’s utopia, because it offers dunes, lakes, seas and even rivers.

Cassini flew 599 miles above Titan on August 21st, which allowed scientists to investigate Kraken Mare in depth, covering an area of 120 miles. During that fly-by, astronomers came to the conclusion that Kraken Mare is deeper than 656 feet- that is a lot of methane. Ligeia Mare, for instance, holds three times the volume of Lake Superior and is less than half the size of Kraken Mare.

And even if Titan resembles Earth where seas and lakes are concerned, the composition of Titan’s bodies of liquid is quite different from Earth’s. First of all, surface temperatures on Saturn’s moons are approximately -290 degrees Fahrenheit. Not to mention that both lakes are filled with liquid methane, ethane and other liquefied natural gasses.

Astronomers attempted to see whether the vanishing islands could have been some sort of sub-sea iceberg. They also thought that the islands may have been fog atop the methane lakes which the spacecraft inadvertently detected. Spectrometer observations ruled out both theories.

Cassini scientists only found out how to measure the depths of Titan’s lakes last year, from Marco Mastrogiuseppe, Sapienza University of Rome planetary scientist. It’s because of this new measurement technique that NASA’s Jet Propulsion Laboratory decided on the August flyover.

“We are likely to see more islands showing up. These lakes and seas are dynamic places.”