You are here: Home / Tech & Science / Scientists Confident that Philae Will Report Again in August 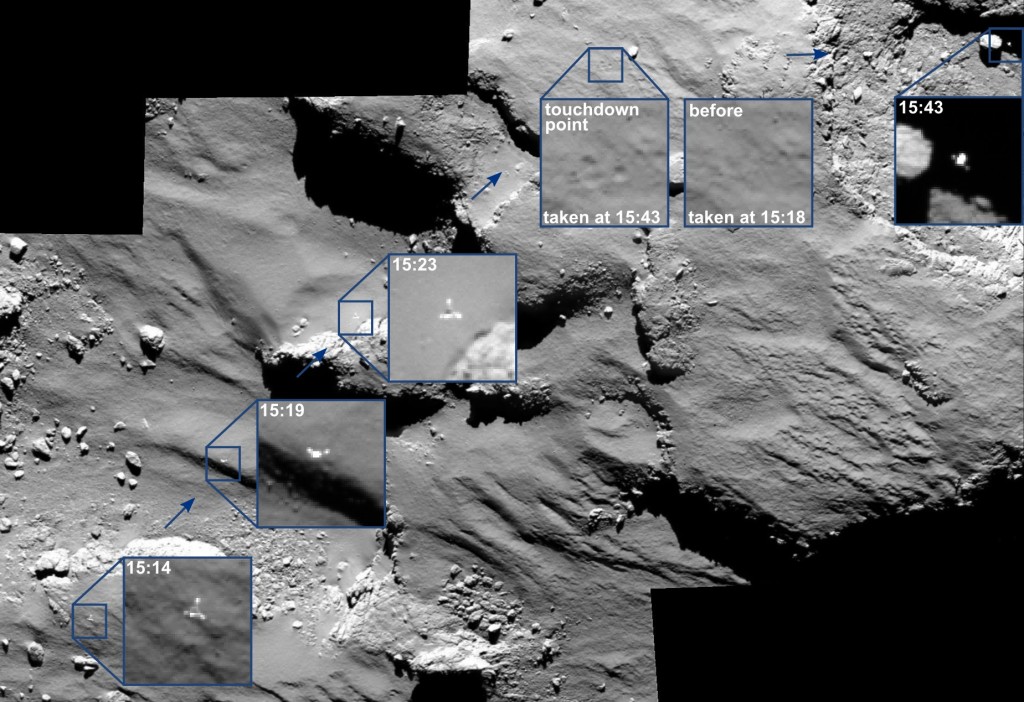 Rosetta engineers are hard at work, scouring the 67p/G-C comet for any signs of the lander that is tucked neatly behind a cliff: they think that Philae will report again in August.

Two weeks ago, Philae made a historic landing on a comet 320 million miles away from Earth. Now, the comet-bouncing lander is asleep after depleting its batteries. Because its anchoring harpoons did not deploy, Philae bounced around for approximately two hours after making contact with the comet. Although the first contact with the comet was on the intended spot, Philae landed approximately one kilometer away from the designated location, where a cliff prevents it solar panels from receiving sunlight. Despite this small impediment, however, Rosetta’s mission is still underway.

Engineers are using Rosetta’s OSIRIS camera to identify any bright reflections coming from the comet so as to triangulate Philae’s position. They are also using the data that CONSERT instruments have gathered on both Rosetta and Philae.

Until now, the team of engineers has managed to narrow down Philae’s location to a depression found on the comet’s south side, approximately 100 feet wide and more than 1,100 feet long. When they finally locate the lander, mission engineers will have a better chance at assessing when Philae will finally receive proper amounts of sunlight.

According to Mike A’Hearn, a member of Rosetta’s science team and a planetary scientist at Maryland University, the chances are reasonably good. Although it’s winter on the comet, summer is coming, he says. As the seasons change, so will Philae’s likelihood of receiving direct sunlight.

Moreover, 67P/G-C is moving towards the sun, which is another reason to be confident. The increasing proximity to our solar system’s star will provide warmth and power so that Philae can finally wake up. The lander already has the best of chances: engineers set Philae up for optimal recharging. They oriented Philae’s solar panels toward the sun by rotating its lander approximately 35 degrees.

Stephen Ulamec, team leader, expressed the engineers’ confidence that Philae would resume contact and begin operating instruments again in a statement on the 17th of November.