You are here: Home / Tech & Science / Humanity Has Just Experienced the Warmest October on Record 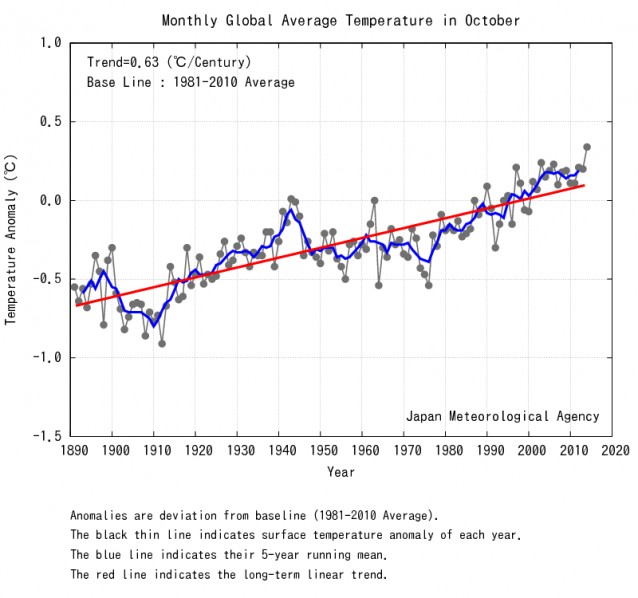 Projections by NOAA make clear the fact that 2014 is increasingly likely to be hottest year on record, and this follows the hottest September, August, June, and March-May in JMA’s records. And these records occurred despite the fact we’re still waiting for the start of El Niño. It is usually the combination of the underlying long-term warming trend and the regional El Niño warming pattern that leads to new global temperature records.

The University of Hawaii at Manao announced Thursday the global oceans were warmest on record for the summer. “[Ocean] temperatures even exceed those of the record-breaking 1998 El Nino year,” said Axel Timmermann, a climate scientist. “The 2014 global ocean warming is mostly due to the North Pacific, which has warmed far beyond any recorded value and has shifted hurricane tracks, weakened trade winds, and produced coral bleaching in the Hawaiian Islands.”

NASA data reveal that far eastern Siberia was an incredible 10°F above normal for October, but western Europe, northern Africa and western North America also saw temperatures up to 7°F hotter than average. The data also comes a day after the National Climatic Data Center (NCDC) released its October numbers for the U.S. that showed the lower 48 had its fourth-warmest October on record.

In spite of the fact that JMA uses a slightly different base period and averaging technique than NASA, its numbers still show that this October was the hottest on record. Specifically, the data show that October was 0.6°F above the 1981-2010 average with similar hot spots compared to NASA.

In case one needs an additional opinion beside these two listed above, keep in mind the fact that NCDC’s third set of global numbers will be released next week. Its data through September show that record warmth in the oceans has in large part driven global temperatures upward for the year to-date. This despite the lack of El Niño.