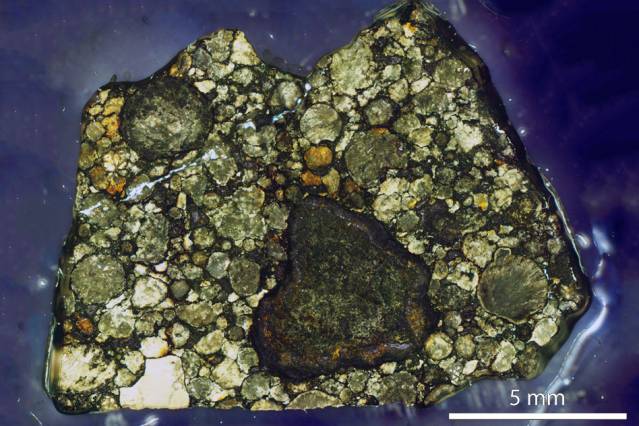 Important clues regarding how the early solar system evolved are provided by accurate laboratory measurements made of magnetic fields trapped in grains within a primitive meteorite. According to the newly made measurements, the shock waves, a type of propagating disturbance, travelling through dusty gases’ cloud around the sun seems to have  played a major role in solar system’s evolution.

One of the study team members, Steve Desch of Arizona State University’s School of Earth and Space Exploration said that the measurements made by researchers were shocking and were never seen in the past. “Not only have they measured tiny magnetic fields thousands of times weaker than a compass feels, they have mapped the magnetic fields’ variation recorded by the meteorite, millimetre by millimeter.”

The results of the measurements were published in a paper on November 12 in the journal Science. And apart from Steve Desch, another leader of the study is Roger Fu, a graduate student of Massachusetts Institute of Technology working under Benjamin Weiss. They all analysed an old meteorite named as Semarkona.

The most accurate laboratory measurements yet made of magnetic fields trapped in grains within a primitive meteorite are providing important clues to how the early solar system evolved. The measurements point to shock waves traveling through the cloud of dusty gas around the newborn sun as a major factor in solar system formation. It may seem all but impossible to determine how the solar system formed, given it happened about 4.5 billion years ago. But making the solar system was a messy process, leaving lots of construction debris behind for scientists to study.

It seems that Semarkona crashed in the north India in 1940 and is also considered as one of the most pristine space rocks of the early solar system. For the research, the team extracted individual pellets, known as chondrules, from a sample of the meteorite. They then measured magnetic orientations of each grain’s of the meteorite. This process confirmed that the meteorite was unaltered since its formation. These findings helped the team continue further measurements of grain’s magnetic strength. It also helped them calculate the original magnetic field in which they were made.

The authors of this study found that the early solar system had a magnetic field that was as strong as five to 54 microteslas, which is almost 100,000 times stronger than what exists today in interstellar space.