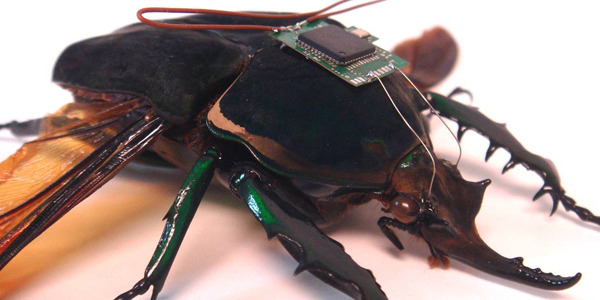 Cockroaches make most of us feel a bit uneasy, however, a team of scientists decided to give the little bugs a new purpose by transforming them into the next-best insectobot. They connected small, audio-sensing harnesses to the insect and then mounted small circuit boards to the live cockroaches. Lastly, leads were connected to the bug’s brains.

With these modifications in place, the team of scientists created what you might call a small army of cyborg cockroaches. The insects can be directed to specific directions after the leads have been placed correctly. When hearing special tones, the insect moves either left or right- they became remote-control biobots.

This small and somewhat disturbing little army is comprised of two type of cyborg cockroaches: the drones and the sensors.

Drones are instructed to move left or right by being played signals while sensors tell the drones where sounds are coming from. The research team hopes that their cockroach army may be used to save people from the aftermaths of earthquakes or other natural disasters. Armies of cyborg cockroaches could be set loose at any time in such an area after being programmed to listen for noise. The sensors would home into different sounds and the drones would gather to the spot of origin and signal rescuers.

“In a collapsed building, sound is the best way to find survivors,”

According to him, these biobots are equipped with electronic backpacks controlling the cockroaches’ movement. These backpacks are also different from one and other. One type of backpack, for instance, allows the built in microphone to capture high-resolution sounds regardless of the sound’s origin.

You would expect that sending an army of cockroaches loose would surely be doomed to fail since the critters could easily vanish behind cracks, never to be seen again. Researchers have also addressed this matter and created what they call an invisible fence, where the cockroaches are steered to remain in.

In the future, the team of scientists wants to add solar-powered cells to the backpacks so the cyborg cockroaches are autonomous for several days.