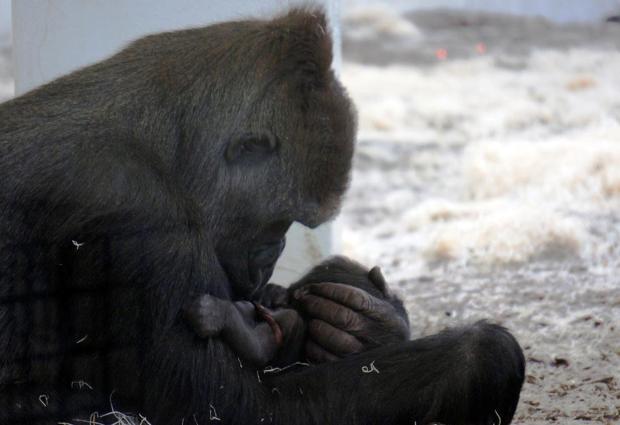 Como Zoo announced that the baby gorilla born last week has died. It was the first baby for Alice, a 12 years old gorilla, as well as the first gorilla born in captivity at Como Zoo in the facility’s 55 years of gorilla conservation and care. The baby’s father, Schroeder, 29, has been at Como Zoo since 1991.

On Saturday, the baby seemed to be in good health. Zookeepers said the baby was vocalizing and appeared to have a good grip. During the next day, signs that the baby’s health is worsening have been prevalent.

Despite best efforts to monitor and record the baby’s food intake, many times Alice would cradle her baby to her chest with her back towards the observing zookeepers making it difficult to determine when, and if, nursing was indeed taking place,

the zoo said in a statement.

Zookeepers postponed intervention because Alice and her baby needed time and space to bond. Alice showed signs of maternal instinct. She was observed cradling and nursing her baby since she gave birth on Wednesday last week.

Caretakers were preparing an intervention process when Alice placed the baby on the ground. Without the need to immobilize Alice, zookeepers could focus on resuscitating the baby. Unfortunately, after several unsuccessful attempts, there was nothing else they could do.

Como Zoo believes that the baby died after complications with food intake. The cause of death will be determined after necropsy.