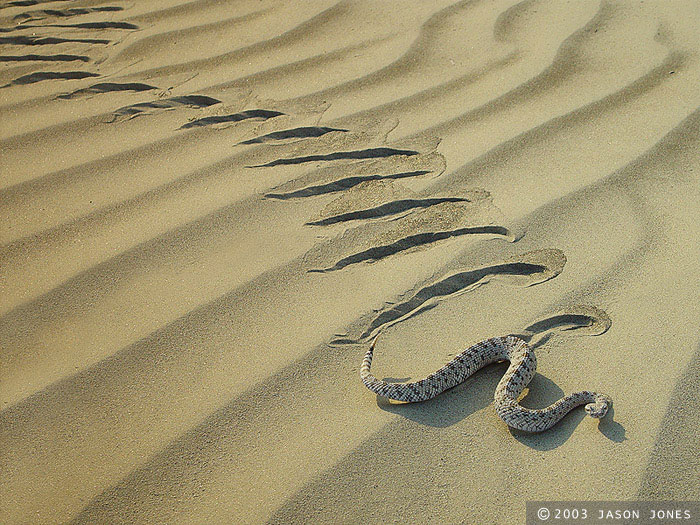 Humans managed to send rovers to Mars, but creating a robot that efficiently crosses a dessert is still a challenge. As in many other similar situations, the best way to get inspiration is to observe an animal who went through numerous evolutionary stages to achieve an efficient way of moving on sand, the sidewinder rattlesnake.

The snake’s movement may seem “weird and unnecessary”, according to study author Dan Goldman, professor of physics at Georgia Tech. But the snake knows what it’s doing.

The research team with members from Georgia Tech, Carnegie Mellon, Zoo Atlanta and Oregon State arranged tanks with sand brought from Arizona. They placed sidewinder rattlesnakes in the tanks and observed how they move up the artificial dunes.

They filmed the snake’s movement with high-speed cameras and discovered that snakes move in waves. Besides the obvious, they got a clearer idea about how the snake manages the two waves to achieve maximum efficiency while climbing steeper dunes. The waves are successive. While one is vertical, the other is horizontal. Snakes know how much of their body integrated in one wave they have to keep on the ground to avoid digging too much sand on the way up. The technique implies a static contact with the sand, which is a great solution to avoid slipping.

When the team tested 13 other species of snakes, only one of them managed to climb the dunes that the sidewinder did.

The next phase was to construct a robot that could simulate the snake’s movement. In fact, the serpentine robot called Elizabeth, after a researcher’s wife (was she amused?) was adapted after the sidewinder. The results were great, as the robot managed to climb the dune all the way up.

Robots able to move efficiently over dunes could be great instruments  used in cave exploration, as well as in other environments where humans would be in danger of getting hurt. Moreover, the technique could be adapted to design robots that will be sent to planets with tricky topography.

“This type of robot often is described as biologically inspired, but too often the inspiration doesn’t extend beyond a casual observation of the biological system,” study author and Carnegie Mellon professor of robotics Howie Choset said in a statement. “In this study, we got biology and robotics, mediated by physics, to work together in a way not previously seen.”