You are here: Home / Business / Dubai Parks & Resorts Project to be Completed in 2020 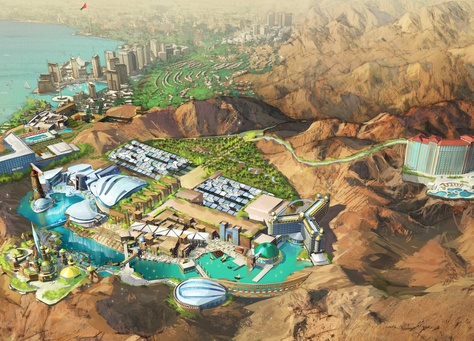 Meraas Holding, a Dubai-based development company has unveiled its new plans this Sunday. According to its blueprints, a Parks and Resorts project will begin to take shape in Jebel Ali. The Dubai Parks & Resorts project was designed as a leisure and entertainment destination that will serve all regions within an eight hour flying distance from the city. The project was launched and completed under the directive of Shaikh Mohammed bin Rashid Al Maktoum, Vice-President and Prime Minister of the UAE and ruler of Dubai.

Dubai has grown tremendously in the last 20 years, and it was only a matter of time until a project like the Parks & Resorts one would be announced. It will articulate Dubai’s Tourism Vision 2020, and will also, very likely, double Dubai’s annual visitor number (from 10 million to 20 million). This also means that the economic contribution of the tourism sector will increase significantly.

Since the announcement of investment was made, Meraas Holding has made excellent progress towards creating partnerships and finalizing key components of the plan. At the moment, world class theme park operators and global movie studios are working together to make the Dubai Parks & Resorts vision become reality.

At the beginning, the project will include three theme parks: Bollywood Parks Dubai, Legoland Dubai and Motiongate Dubai. In the future, the Riverpark will be added, as well as the entrance plaza and Lapita. Lapita will be a family-themed hotel. According to official reports, the first phase of the Dubai Parks & Resorts will be completed in 2016. Ground work for the project began this year, in February.

‘Meraas is committed to developing new concepts to build Dubai’s position as one of the world’s great new cities. Dubai Parks & Resorts has been designed as the first of its kind entertainment destination that simultaneously opens gates of three theme parks. The project will feature leading intellectual properties from elite industry players to create leisure and entertainment concepts that are expected to draw more than five million residents and tourists annually. We are confident our efforts will contribute to achieving the Dubai Tourism Vision 2020 and become the pride of our nation.” – Abdulla Al Habbai, chairman of Meraas Holding

The chief executive officer for the project will be Raed Al Nuami. Before this, he was chief leisure and entertainment officer at Meraas Holding. The company also stated that Motiongate Dubai will transport visitors on a journey of discovery, by bringing them the most popular Hollywood characters from the big screen.

On the other hand, Bollywood Parks Dubai is the first ever theme park in the world dedicated to the Indian film industry. It will offer visitors a physical location to enjoy and celebrate the biggest names from the Indian Cinema.

Lastly, Legoland Park is the seventh park of its kind in the world. It will feature the infamous Lego brick to life interactive world designed for children of all ages.