You are here: Home / National News / Ukrainian Forces Take Control of the Rebel-Held City of Luhansk

Official reports say that the Ukrainian army has captured a police station from the rebel-held base. The army also reported losses, including a fighter plane which was taken down by pro-Russian forces.

Their troops penetrated the city of Luhansk, in eastern Ukraine. This event might prove a breakthrough development after almost half a year of conflicts, says the Ukrainian government. State officials also have reason to believe that the rebels are receiving reinforcements, because they have seen a column of armored vehicles moving near the Russian border. 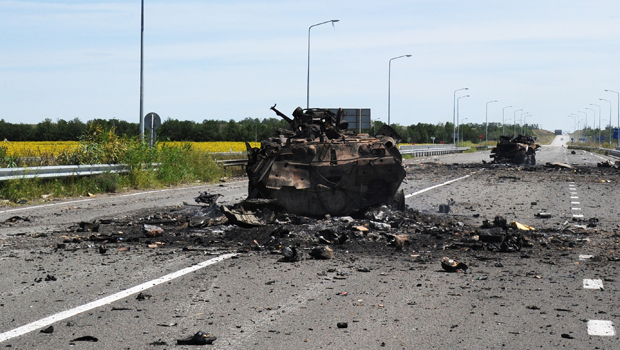 A reporter from the Associated Press spotted several heavy vehicles and at least one rocket launcher moving towards the rebel-controlled territories. The column of armored vehicles was seen moving just southeast of Luhansk, near a town close to the Russian border. It was heading west, in the direction of the rebel territory. Ukrainian forces still do not know if the column came from Russia, but the armored vehicles included a Strela-10 (short-range surface-to-air missile system that can hit targets which are 3.500 meters away).

A Russian aid convoy was also supposed to cross the same region on Sunday. It was carrying important supplied for Luhansk and other afflicted regions. However, the convoy of 270 vehicles stopped later that day, and it has been marooning near the down for days. Ukraine complained that this mission was not authorized by the Red Cross, and the Red Cross declared that delays occurred because there is no security guarantee from either sides of the conflict.

While the status of the Russian aid convoy remains unclear, Russian, German, French and Ukrainian ministers are expected to meet in Berlin to discuss the crisis. German Foreign Minister, Frank Walter Steinmeier, believes that a political solution can be found even as humanitarian efforts are being made.

“…the focus would be on a timetable for a durable cease-fire and effective controls along Ukraine’s border with Russia.”

Separatists have actually bragged about receiving support from none other than Russia as they continued their attack on the Ukrainian army (including its fighter plane). Alexander Zakharchenko, the self-proclaimed leader of the separatist forces says that he received over 1200 Russian trained fighters, 150 armored vehicles and 30 tanks in a “crucial moment”. Vladimir Putin’s spokesman denied these allegations.

Ukrainian troops managed to secure the police station in Luhansk on Saturday after several clashes in the Velika Vergunka district. Luhansk is currently on the verge of a humanitarian catastrophe due to repeated fights (running water and power is not available in the city, and ground delivery of vital provisions has been halted).

According to Oleksiy Dmitrashkovsky, a figher plane was shot down by separatists, over Luhansk, after it launched an attack on the pro-Russian rebels. Although he also declared that the pilot made it to safety, Andriy Lysenko later declared that his condition has yet to be clarified.