Russian President, Vladimir Putin, has never cared very much for the threats of the U.S. and European Countries. He remains defiant even as Ukraine seeks to renew its pleas for Western military help. Ukraine is accusing Russia of sending armored columns that have driven back the country’s forces in the name of pro-Moscow rebels. 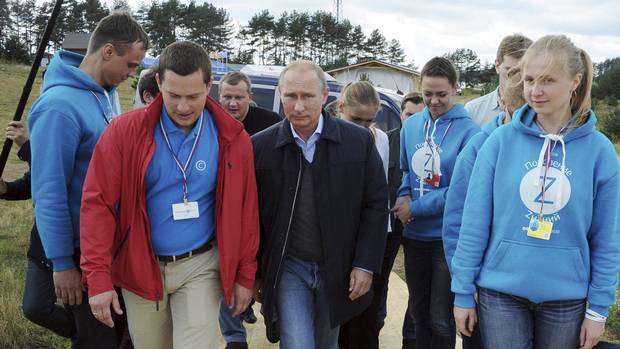 Vladimir Putin also compared Kiev’s attempts to regain control of the rebellious eastern cities to the Nazi invasion of the Soviet Union during World War II.  He added that the rebels managed to halt the invasion, and believes that the surrounded Ukrainian troops should be permitted to retreat.

In the last 72 hours pro-Russian rebels have suddenly opened a new front to push back Ukrainian troops out of strategic coastal territories in the Sea of Azov region. Western countries and Kiev believe that this reversal is a result of the arrival of Russian troops and armored columns, that Putin has dispatched to prop up a rebellion (which would collapse if left unaided).

During a speech for young people at a summer camp, President Putin urged his countrymen to be “ready to repel any aggression towards Russia”. He also referred to Ukrainians and Russians as “practically one people”.

Also, the rebels said they would accept Putin’s proposal (of allowing Ukrainian troops to retreat) if the government forces turn over their armor and weapons. Kiev believes that this declaration proves that the rebels are doing Mosvow’s bidding.

“When one country sends military forces into another country without the agreement and against the will of another country, that is called an intervention and is clearly unacceptable.” – Foreign Minister Laurent Fabius

Laurent Fabius also added that Russia might be facing even more sanctions from the European Union in the future. Josh Earnest, a Washington White House spokesman, declared that Russia’s footprint is undeniable in Ukraine.

“We have regularly marshaled evidence to indicate what exactly is happening, despite the protestations of the Russian government that for some reason would have us all believe otherwise (…) The fact is, those denials are completely without any credibility, and, you know, we’ve been pretty candid about that.” – Josh Earnest

On Friday, Ukraine requested full membership in NATO. This would result in protection through a mutual defense pact with the United States, that will probably result in more pressure on the West. Western countries have made it very clear that they are not ready to fight or protect Ukraine, but it is hoping that economic sanctions imposed on Russia will settle the situation.

Sadly, it seems that these sanctions have done little to deter Putin. Russia provides energy for many countries, and more economic sanctions will cripple the economy of Western countries.

At the moment, Moscow is publicly denying that its forces are fighting to support pro-Russian rebels. On the other hand, the rebels have confirmed that Russian troops are fighting on their behalf.

“Russia’s partners … should understand it’s best not to mess with us.” – Vladimir Putin

The Russian president also said that the assault on the rebel-held cities of Luhansk and Donetsk are similar to the 900-day Nazi siege of Leningrad.

“Small villages and large cities surrounded by the Ukrainian army which is directly hitting residential areas with the aim of destroying infrastructure (…) It sadly reminds me the events of the Second World War, when German fascists … occupiers surrounded our cities.”

President Putin believes that the only solution for this conflict was for Kiev to negotiate with the rebels. But Kiev refused to do so. They consider