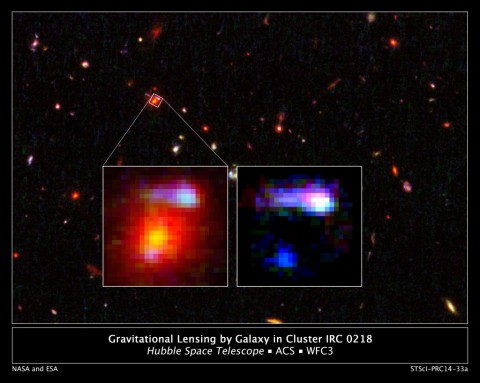 Astronomers can now see back as far as 9.6 billion years thanks to Hubble’s new discovery: a lensing galaxy that is the most distant cosmic magnifying glass we’ve found to date. Because a lensing galaxy is so massive, it bends gravity, distorts light from the objects behind it and magnifies.

Recently, the NASA Hubble Space Telescope has discovered a gigantic elliptical galaxy. Because of its size, the galaxy has created a lens that permits astronomers to see back 9.6 billion years.

Behind this cosmic lens, astronomers could observe a small spiral galaxy that is just forming and is undergoing rapid bursts of star formations. From here, it has taken light over 10.7 billion years to reach us and such an alignment is extremely rare at such great distances from earth.

If astronomers could continue to locate such lensing galaxies, they could gain insight into the way young galaxies evolve into dark matter dominated galaxies we know today.

Kim-Vy Tran, from the Texas A&M University in College Station explains that 9 billion years ago, galaxy-galaxy lensing wasn’t something that you would expect to find. Moreover, such an exquisite alignment is also difficult to see during the early universe.

Astronomers explain this phenomenon by comparing it to a normal magnifying glass: when held at arm’s length, the chance of seeing an enlarged object are big but when you begin to move the magnifying glass across the room, chances of seeing other objects that perfectly align with your magnifying glass dwindle.

Keneth Wong and Sherry Suyu from the Institute of Astronomy and Astrophysics in Taipei said that in cosmic terms, all the lens galaxies we currently know about are relatively nearby in cosmic terms. It’s precisely because of this that Hubble’s find is so extraordinary because it allows astronomers to learn about the way dark-matter contents changed in galaxies of the distant past. While dark matter can’t be seen, it accounts for the bulk of the universe’s matter.

By comparing the galaxy astronomers have observed through this lens galaxy to other galaxy-galaxy lenses that are closer, they can understand how the content of dark-matter shifts in developing galaxies and how it evolved over time.

According to Suyu, a lensing galaxy is underweight in terms of dark-matter content as opposed to the Milky Way for instance, whose mass is locked up in dark matter. It’s very surprising that a massive lensing galaxy such as this would have such a small amount of dark matter, astronomers said.