A long time has passed since Pink Floyd last released an album. It has actually been believed that the band separated for good after the “The Division Bell”, in 1994, ended. New information has surfaced, and it seems that Pink Floyd is preparing for a new album, for the first time in 20 years. This year is the anniversary of two decades since the release of “The Division Bell” and it seems that the band wants to celebrate. The Band is releasing a new album!

David Gilmour’s wife, Polly Samson, was the first to share this incredible news. She sent out a Tweet yesterday in which she shared a few details about the new album. According to her, the new record will be based on 1994 sessions with the late Richard Wright, which are “swansong and very beautiful”.

The next person to confirm the release of the new album, which will be entitled “The Endless River”, was Durga McBroom-Hudson. She sang with the band back in the 80s and 90s. She has recently revealed a photo of their recording sessions on Facebook (in it Gilmour is conducting a trio of vocalists in the studio). At that time it was believed that the photo came from Gilmour’s solo album recordings (which also features David Crosby & Graham Nash), but in reality it was a session for the Endless River upcoming album. She also declared that these songs appeared for the first time during the “Division Bell” sessions, but they have never been made public. In other words, everything that we will hear in the Endless River album is completely new. 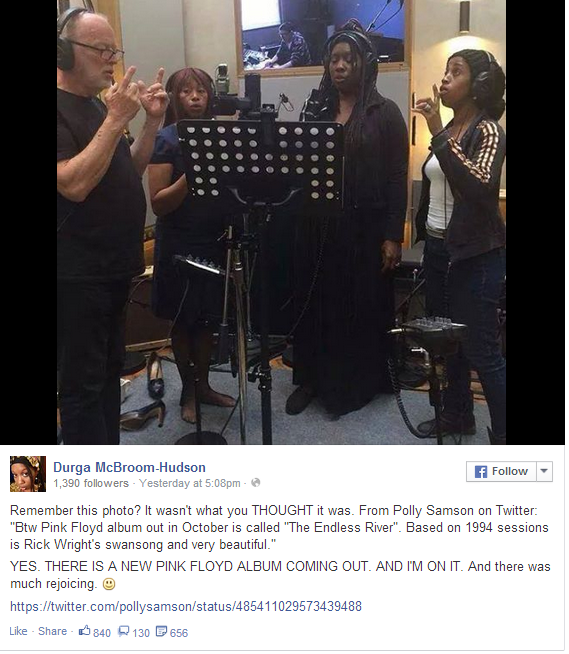 The much-anticipated songs are actually a part of the side-project that Nick Mason spoke about in the past, called “The Big Spliff”. Fans are extremely excited to hear Richard Wright perform once again for them. All the songs have received a little bonus. As McBroom-Hudson wrote on Facebook, although the songs were originally completely instrumental recordings, David decided to add her vocals to them, expand as backing vocals, and even do a lead on at least one of them.

YES. THERE IS A NEW PINK FLOYD ALBUM COMING OUT. AND I’M ON IT. And there was much rejoicing.

We still do not know if Roger Waters is planning in getting involved with the new album (given his split from the group in 1985, he will probably not make an appearance). According to recent news, he is working on a solo album at the moment. Gilmour also plans on releasing a new album (his first one since 2006).

Wright passed away in September 2008, and it seems that this album is the only opportunity left for fans to hear new music from the artists. A spokesperson from the band also confirmed rumors about the album. He said that a project will be released, but there is no tour planned.