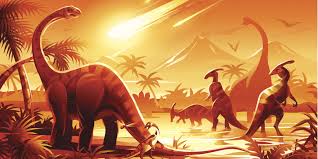 The journal of Biological Reviews has recently published a new study stating that prehistoric animals could, in theory, have survived the asteroid that caused the extinction of dinosaurs millions of years ago if that asteroid hat not hit at that precise moment. Researchers said that the world was hit as it was in flux. They added that this extreme environmental upheaval would have made dinosaurs particularly vulnerable.

You wouldn’t normally expect such an explanation from scientists, but a group of 10 researchers stated that the extinction of dinosaurs might have been the result of “colossal bad luck”.  They explained that at the time when the 6.2 mile-wide asteroid hit Earth into what we now know as Mexico, the area was filled with extreme volcanic eruption, shifts in temperature as well as changes in sea levels.

Paleontologist Steve Brusatte said in an interview for the Daily News that the overall perception that the world was idyllic at the time when dinosaurs went extinct is in fact false. The world was hit was it was undergoing drastic changes and this led to severe lacks in diversity among herbivore dinosaurs. These herbivores were those on which carnivorous dinosaurs dined and such disequilibrium caused the food chain to weaken and eventually break.

Brusatte added that because food webs were so vulnerable and on the brink of collapsing, dinosaurs were much more susceptible when the asteroid did hit. Had it intersected our planet a few million years earlier, Brusatte said, it might have not been devastating.

As the asteroid crash caused earthquakes, tsunamis and wildfires, subsequent food chain collapses would surely wipe out any species of dinosaur that might have survived the crash itself. Had the big plant eater dinosaurs been more diverse at the time of the crash, the entire species would have been much stronger and could have endured the impact. Scientists believe that the only dinosaurs who survived were the flying ones, who evolved later on into modern-day birds.

This research project took place at the University of Edinburg, where an international team of paleontologists examined how life changed in the few millions of years that preceded the asteroid hit that wiped out the dinosaurs.

The team had access to the most recent dinosaur fossil database and analyzed the diversity of these fossils over time. They concluded that the extinction of dinosaurs was abrupt and that, contrary to previous belief, dinosaurs had not wasted away for tens of millions of years.