You are here: Home / Tech & Science / Lavazza To Send An Espresso Into Space For Astronauts

As capsule-based espresso machines have taken over the world, an Italian coffee company plans to take its coffee to space. Italian coffee manufacturer Lavazza has announced that it is working with the Italian Space Agency (ISA) and engineering firm Argotect and announced their project to create the ISSpresso machine – taking its name from the International Space Station (ISS), the first capsule-based espresso system able to work in space.

After a hard day’s space walking, astronauts would probably love nothing more than to strap themselves securely into their favorite armchair and relax with a cup of freshly brewed coffee as they watch the world go by. 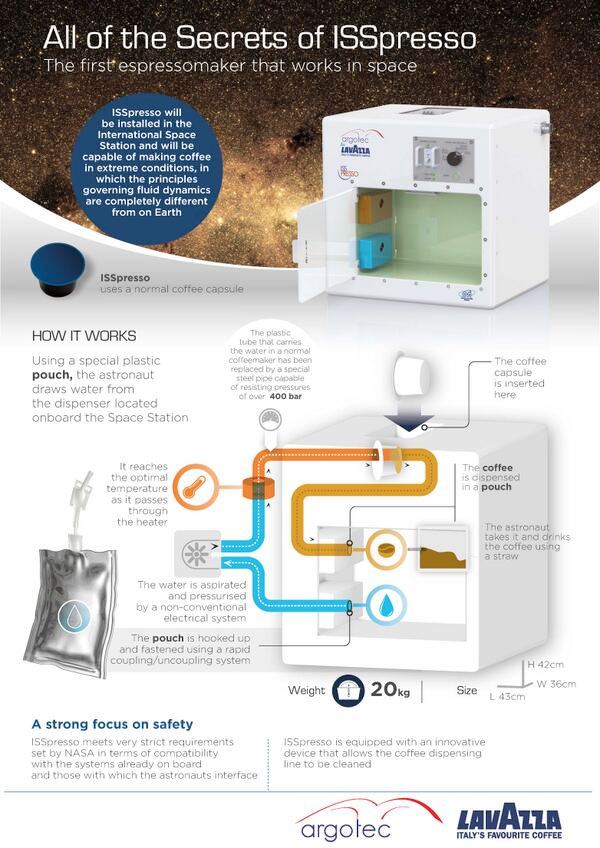 Air Force Captain Samantha Cristoforetti of the European Space Agency will be on board and will be the first Italian woman to go into space as well as the first astronaut in history to drink espresso while in orbit. “How cool is that?” Christoforetti wrote on Twitter. “I’ll get to operate the first space espresso machine!”

The ISSpresso in addition to espresso can also be used to brew caffè lungo and other hot beverages, including tea and broth is designed to meet the needs of the space environment.

Designing the ISSpresso was clearly not an easy task as engineers were forced to overcome challenges such as how to handle liquids at high pressure and temperature in microgravity conditions.

“The machine is so complex that it weighs about 20 kilograms since there are back-ups of all the critical components for safety reasons in accordance with the specifications agreed by the Italian Space Agency,” Lavazza said in a release. Company VP Giuseppe Lavazza added that he hoped the ISSpresso will help to improve the living and nutrition quality of astronauts engaged on long missions.

ISSpresso represents a technologically high-value project which, besides adding variety to the astronauts’ menu, will help improve our understanding of the principles of fluid dynamics and conditions in microgravity.

The ASI will bring ISSpresso aboard the ISS, thanks to bilateral cooperation agreements with the NASA, as it shares with the project partners the objective of improving the quality of life of ISS astronauts, as well as the astronauts who will take part in future long interplanetary exploration missions.