You are here: Home / Tech & Science / Why Don’t Octopuses Get Themselves Entangled into Knots

A new study published in the latest issue in the journal Current Biology showcased the extraordinary fact of one of the most amazing creatures in the ocean. The octopus who can intermingle into the background, transmute into the shape of other brutes, and even regrow limbs chopped off by hunters and scientists.

Octopuses (Octopus vulgaris) appear like a tangle of squidgy arms, but the mystery is how do octopuses not get tangled up in knots?

The study determined that octopus skin repels itself. 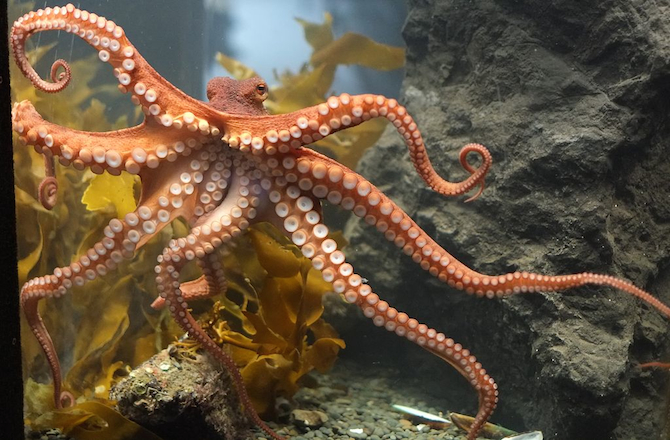 A self-recognition mechanism in the skin of the common octopus inhibits its suckers from sticking to the animal.

No one has noticed this nonstick phenomenon before, says Frank W. Grasso, director of the BioMimetics and Cognitive Robotics Laboratory at Brooklyn College, City University of New York.

“Two-thirds of an octopus’ nerves are not in its brain, but in its arms,” says James Wood, a marine biologist affiliated with the University of Hawaii on Oahu who was not part of the study.

“We don’t really know how the whole system works,” he adds.

Binyamin Hochner and his colleagues at the Hebrew University of Jerusalem had studied octopus arms for years. The decisions are never controlled by central brain, and much of their movement and behaviour are made within the arms themselves. Out of the octopus’s 500 million nerve cells, more than half are in their arms.

While examining other aspects of the octopus arm, on more than 30 occasions, Hochner noticed that amputated octopus arms never latched on to themselves or the arms of other octopuses.

“We were surprised that nobody before us had noticed this very robust and easy-to-detect phenomena,” co-author Guy Levy of the Hebrew University of Jerusalem, said in a press release. “We were entirely surprised by the brilliant and simple solution of the octopus to this potentially very complicated problem.”

Octopuses have a chemical in their skin that stops their suckers from sticking. The scientists are now trying to learn which chemical, or combination of chemicals, is accountable for restricting the octopus’s suckers, and how the animals can distinguish their own flesh from that of others.

Cecilia Laschi, a biorobotics professor at the Scuola Superiore Sant’Anna in Pisa, Italy, who was not involved in the study said this could contribute significantly to the field of so-called soft robotics, machines that are able to change their shape as needed in the course of executing tasks.