The recent shooting incident that has left one whooping crane dead and another severely wounded has sparked uproar among environmentalists as well as animal rights activists. The particular species of crane is considered endangered which makes it illegal to shoot them. The incident occurred in southwestern Louisiana while the birds were engaged in building practice nests. The female was found dead while the male species was found in a severely wounded state when wildlife officials reached the spot. The survivor sustained severe wounds in one of its wings which officials doubt may not heal enough to allow the crane to fly again.

What makes it even more depressing for wildlife officials is that the pair was recorded to form a mating bond in 2013, the only instance of it so far. They were released in the wild in 2011 and were among those who are expected to start building nests successfully from this year. The two cranes were not matured enough to lay eggs though whooping cranes often indulge in building what can be termed as practice nests. Whooping cranes bond for life and are known to live up to 24 years in the wild. 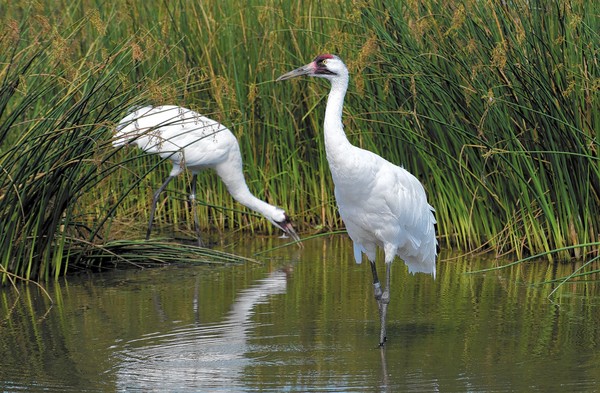 Whooping cranes are considered the tallest bird to be found in the entire North America. They are protected by both state and federal laws to help raise their numbers. They have been driven to the brink of extinction due to rampant shooting as well as a steadily diminishing habitat. Officials are closely monitoring 50 cranes of the species using radio transmitters to gain a better insight of their lifestyle to help protect them better. Of the 10 whooping cranes that were released in the wild in 2011, only one has made it so far.

Wildlife officials though are yet to zero in on the killer and are offering a reward of $1,000 to anyone who shares information that can help nab the shooter.