You are here: Home / Archives for Whooping Crane 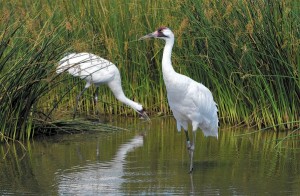 The recent shooting incident that has left one whooping crane dead and another severely wounded has sparked uproar among environmentalists as well as animal rights activists. The particular species of crane is considered endangered which makes it illegal to shoot them. The incident occurred in southwestern Louisiana while the birds were engaged in building practice nests. The female was found dead … END_OF_DOCUMENT_TOKEN_TO_BE_REPLACED