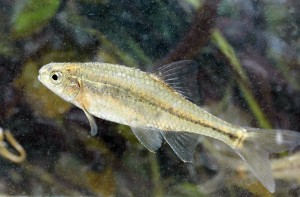 The small Oregon chub, a humble species of minnow that was listed as endangered in 1993, has been taken off the endangered list.

These fishes dwell only in Oregon backwaters and are the first fish ever taken off U.S. Endangered Species Act protection.

The Oregon chub is typically about 3 inches long, with an olive-green back, silvery side and large scales.

In 1993 it was only found in eight areas, with a total population of about 1,000. With the help of protections put in place by state and local government and residents, the fish has multiplied. Its population now stands at more than 150,000 fish in 80 locations.

So far, 26 species have effectively recovered and been detached from the list since it was created 40 years ago.

The change isn’t abrupt. The proposal practice consists of a 60-day public comment period, and if successful the agency will persist to monitor the fish for nine years to make sure the growth continues.

“While the chub isn’t an iconic fish species that many think about… it is a very important part of the ecosystem and indicator of good water quality and ecosystem health,” said Paul Henson, with the Oregon Fish and Wildlife Office, in a statement. “By successfully recovering the chub, we’re helping many iconic wildlife species and improving the watershed for all Oregonians.”

The Oregon Department of Fish and Wildlife has sustained recovery efforts since 2005.

The Oregon chub eats aquatic insects like mosquitoes and has a lifespan of up to 10 years. Repair of its riparian habitat also helps rare amphibians like the red-legged frog and native reptiles like the Western pond turtle.

Roy Elicker, Director of the Oregon Department of Fish and Wildlife said, “The partnership with the U.S. Fish and Wildlife Service was instrumental in Oregon chub recovery efforts”. “Their funding of monitoring and restoration activities, combined with the coordination of the safe harbor agreement to protect landowners, is big reasons why we’re celebrating this recovery.”

“The success we have had with the Oregon chub reinforces that, working together, we can recover species that currently are threatened or endangered” said Sally Jewell, Secretary of the Interior.

Phil Pister, retired fishery biologist with the California Department of Fish and Wildlife and founder of the conservation-oriented Desert Fishes Council, said it is essential to save fish like Oregon chub that have no evident commercial value.

“When people ask why it’s important to rescue endangered fish, I ask them, ‘How would you feel if you were the fish?'”