On analyzing images released by NASA’s Spitzer Space Telescope, it was found that fugitive stars charge through the Milky Way galaxy, creating arcs when they pass through it.

The example of the speedster star as cited by the NASA team in this case is called Kappa Cassiopeiae or HD 2905 in Cassiopeia constellation. It is a massive, hot supergiant star that travel at around 2.5 million mph relative to its neighbors (1,100 kilometers per second).

The surrounding streaky red glow of material in its path is called a bow shock, and they can often be seen in front of the speediest, most massive stars in the galaxy. 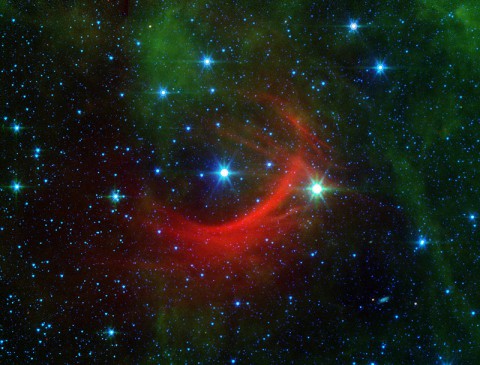 Bow shocks are the structures that develop when such stars traverse streaky red glowing material in its path. They are formed on smashing up of magnetic fields and winds of particles moving off the stars with generally invisible diffused gas and dust that fills the space between the stars.

Astronomers see how the bow shocks are developed in fast massive stars, and are also formed in slow-moving stars like our sun that are almost invisible at all wavelengths of light.

Astronomers said the astounding fact is that the shock from Kappa Cassiopeiae has been generated at about a distance of 4 light years away from the star showing the sizable effect this star has on its surroundings.

They also found faint green color features in the image result from carbon molecules called polycyclic aromatic hydrocarbons in dust clouds along the line of sight that are lighten up by starlight.

Kappa Cassiopeiae is visible to the naked eye in the Cassiopeia constellation, but its bow shock only discloses itself in infrared light.

For this Spitzer image, infrared light at wavelengths of 3.6 and 4.5 microns is delivered in blue, 8.0 microns in green, and 24 microns in red.

Scientists believe that the red filaments crossing the bow shock may be tracing features of the magnetic field that runs through the galaxy.