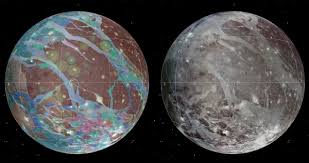 A team of scientists led by Wes Patterson of the Johns Hopkins Applied Physics Laboratory (APL), Laurel, Md., and Geoffrey Collins of Wheaton College, Norton, Mass., has created the first global geologic map of Ganymede, a Galilean moon of Jupiter. This special map joins Earth’s moon, and other Jovian moons Io and Callisto, in the group of planetary bodies for which such maps have been created.

It’s only the fourth of its kind layering a planetary satellite.The map is constructed on the basis of images from missions such as Voyager and Galileo, and was put assembled by a team headed by Johns Hopkins Applied Physics Laboratory’s Wes Patterson and Wheaton College’s Geoffrey Collins. Voyager’s pictures dates back to 1979, while the Galileo pictures were taken between 1995 and 2003.

Paterson quoted, “By mapping Ganymede’s entire surface, we can more accurately address scientific questions regarding the formation and evolution of this truly unique moon”.

Since the discovery of Ganymede in January 1610, it has been the focus of recurrent observations, formerly by Earth-based telescopes, and later by close orbital flight missions and spacecraft orbiting Jupiter.

Ganymede has its own magnetosphere (the only satellite in the solar system known to possess one) and its intricate geology shows two dissimilar ages in its formation. The 5,262-diameter Jupiter’s satellite is interesting to scientists in very diverse manner. The oldest landscape types are dark and highly constellated, while younger regions are “marked with an extensive array of grooves and ridges”, the scientists remarked. These studies portray a complex icy world whose surface is characterized by the striking contrast between these two major terrain types.

The map throws light on geologic features of the moon that formed and evolved over much of our solar system’s legacy.