According to a research 42 nations or territories around the world legalize the harvest of marine turtles . This amounts to more than 42,000 turtles being legally caught each year by these fisheries.

The study, carried out by Blue Ventures Conservation and staff at the University of Exeter’s Centre for Ecology and Conservation, is the first comprehensive review the number of turtles at present taken within the law. 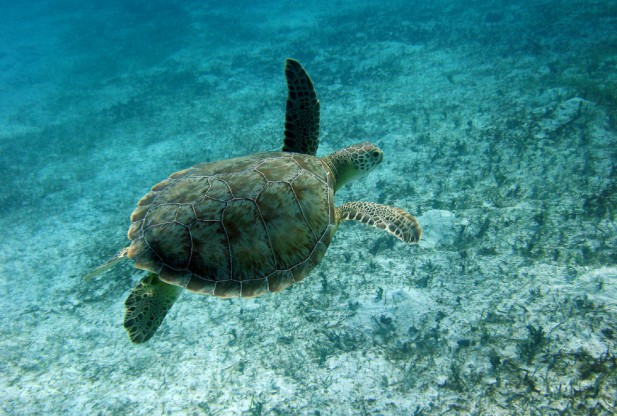 “This is the first study to comprehensively review the legal take of turtles in recent years, and allows us to assess the relative fisheries threats to this group of species,” said Frances Humber of Blue Ventures and a PhD student at the University of Exeter, who led the research. “Despite increased national and international protection of marine turtles; direct legal take remains a major source of mortality. However, it is likely that a fraction of current marine turtle mortality take is legal, with greater threats from illegal fisheries and bycatch.”

Bycatch is the unintended trapping of turtles in commercial fishing nets anticipated for other species.

Marine Turtles or sea turtles populate most of the world’s oceans. All seven marine turtle species are currently listed on the IUCN Red List of Threatened Species.

The first marine turtle harvest legislation was initiated in Bermuda, in 1620. The law prohibited taking any turtle “under eighteen inches in the breadth or diameter.”

Commercial capture of marine turtles has continued around the world for centuries. In the late 1960s, an estimated 17,000 tons was captured globally. During the peak of Mexico’s sea turtle exploitation in 1968, it alone took an estimated 380,000 turtles.

Recently increased efforts and awareness created by protectionists and conservationists have led to greater protection of the animals with “178 countries currently signed up to the Convention on International Trade in Endangered Species of Wild Fauna and Flora (CITES) restricting the international trade of turtle products.

Recent increased conservational awareness has led to a greater protection of the animals, with “178 countries now signed up to the Convention on International Trade in Endangered Species of Wild Fauna and Flora (CITES) restricting the international trade of turtle products.”

The research is a product of collective data on the seven marine turtle species from more than 500 publications and 150 in-country experts worldwide.

The direct take of turtles in many regions and countries continues legally.

Legal fisheries are concerted in the wider Caribbean region, including several of the UKs Overseas Territories, and the Indo-Pacific region, with Papua New Guinea, Nicaragua and Australia together accounting for almost three quarters of the total. They calculate approximately that currently more than 42,000 marine turtles are caught each year legally; green turtles contribute to 80% of the total count.

Dr. Annette Broderick, of the Center for Ecology and Conservation at the University of Exeter’s Penryn Campus in Cornwall said, “We were surprised to find that there are 42 countries with no legislation in place that prohibits the harvest of marine turtles, although for many of these countries these harvests provide important sources of protein or income. It is however important to ensure that these fisheries are operating at a sustainable level.”

The article, ‘So Excellent a Fishe: A global overview of legal marine turtle fisheries‘ is published in the latest edition of the journal Diversity and Distributions.