Two ships that were stranded mid-way in the Antarctic ice broke free on Tuesday.

Akademik Shokalskiy had been stranded for two weeks since Christmas Eve into the deep ice with scientists, journalists, tourists and crew members on board.The ship was initially trapped 1,500 nautical miles (1,726 statute miles) south of Hobart, Australia. 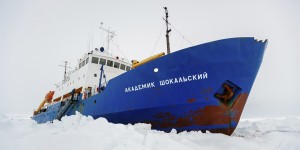 All 52 passengers on the ship were ferried by a helicopter to an Australian icebreaker last week.

Another Chinese icebreaker had gotten stuck in the ice during an attempt to extract the Russian ship.

According to Russian media, a shift in wind direction has helped in freeing both Russian ship and Chinese icebreaker.