You are here: Home / Tech & Science / Scientists sequence genome of elephant shark, say they have no bones

A new research has suggested that the elephant shark and its cousins are the world’s oldest-living jawed vertebrates on the Earth.

A team of researchers came to the conclusion after they conducted sequencing of the genome of the elephant shark and its cousins the sharks, skates, rays and chimaeras.

Elephant shark is a curious-looking fish with a snout resembling the end of an elephant’s trunk. Researchers said that the elephant shark was selected for sequencing among all the cartilaginous fishes because of its compact genome. It’s genome is one-third the size of the human genome. 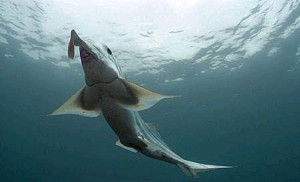 While sequencing the genome, the researchers found that the Elephant shark’s skeletons are made of cartilage and not of bones. This makes them an odd member of vertebrates group.

“The genetic blueprint will help in understanding the evolution and diversity of bony vertebrates, including humans,” said senior author Wesley Warren, PhD, research associate professor of genetics at The Genome Institute at Washington University School of Medicine.

Researchers studied the elephant shark genome and compared it with other genomes. While analyzing the genome, the scientists found that a family of genes were absent in the elephant shark, which were usually present in all bony vertebrates. Moreover, it was also discovered that the elephant shark lacked special types of immune cells that are responsible for defence against viral and bacterial infections.

The research has been published in the journal Nature.