NASA scientists have said that the celestial bodies that vary between Earth and Neptune in size are indeed planets as there is no clear dividing line between rocky worlds like Earth and fluffier planets like water worlds or gas giants.

During a press conference at the 223rd meeting of the American Astronomical Society, the scientists unveiled some of the discoveries of the Kepler spacecraft that proved the instance. Two of the discovered planets were called twin of Earth that was found in another solar system that was 200 light years away from ours. 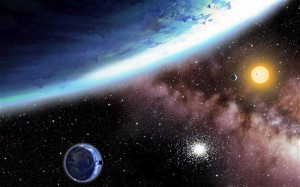 The first discovery is about a planet, dubbed KOI-314c, which has the same mass as Earth but is hotter and fluffier. It has been discovered orbiting a red giant star 200 light years away from Earth. The astronomers say although the planet weighs same as Earth, it is 60 percent larger in diameter. This proves that it must have a very thick, gaseous atmosphere. Its temperature has been estimated to be 220 degrees Fahrenheit (104 degrees Celsius). Life is not possible in such hot condition. Moreover, KOI-314c is only 30 percent denser than water. Scientists say, this suggests that it is enveloped by a significant atmosphere of hydrogen and helium.

The second planet, dubbed KOI-314b, is about the same size as KOI-314c but weighing about 4 times as much as Earth. It orbits the star every 13 days unlike KOI-314c that orbits for 23 days. Scientists say the discovery was purely co-incidental as they were analyzing the Kepler data not for exo-planets, but for exo-moons.