You are here: Home / Tech & Science / Mystery Behind Birds Flying In a V Formation Revealed 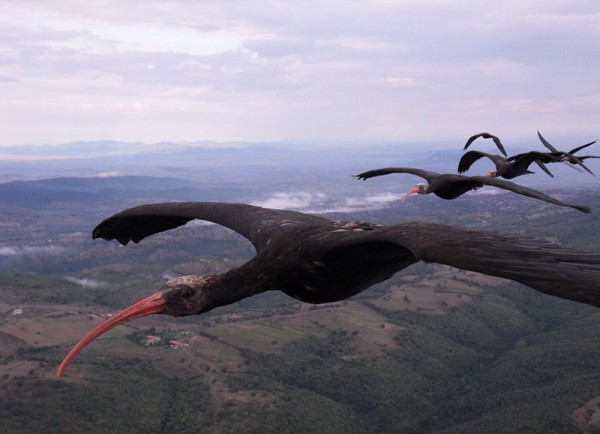 A new study published in the journal Nature and led by researchers from Royal Veterinary College in the UK, finds that the migrating birds carefully position their wingtips and sync their flapping, apparently to hook the former bird’s updraft—and save energy during flight.

Scientists concluded after tracking a group of large black birds, the northern ibises—each equipped with ultra-light sensors with a tiny GPS device—that had been trained to follow an ultralight aircraft.

The surprising fact is that the birds know how this formation contributes to the flock as a whole. Bird formations, called echelons, come in many arrangements. According to Scientific American, the “J” formation is actually more common than the “V” formation, but the V is probably the most commonly noticeable.

According to a 2001 report on bird formations, the birds fly in a V actually to conserve energy.

“From a behavioral perspective it’s really a breakthrough,” says David Lentink, a mechanical engineer at Stanford University in Palo Alto, California, who was not a part of the study. “Showing that birds care about syncing their wing beats is definitely an important insight that we didn’t have before.”

Ty Hedrick said “It’s a pretty impressive piece of work as it is, but it does suggest that there’s a lot more to learn.” Ty Hedrick, is a biologist at the University of North Carolina, Chapel Hill, who studies flight aerodynamics in birds and insects.

It was believed that birds doesn’t possess such precise engineering quality. The scientists suspected that whether they contain the skill to process the flight dynamics and sensory feedback required to implement these proficient formations.

A seven-minute analysis showed how perfectly the ibises positioned themselves while flying in a V, so as to exploit the updraft in another bird’s wake, letting them conserve their energy.

They additionally appeared to time the flapping of their wings to take full advantage of that updraft, by creating a wingtip path, an equivalent wave track through the air as the wingtip of the bird up ahead.

And once one bird flew directly behind another instead, it gave the impression to regulate its fluttering to scale back the effects of the wake’s downdraft. Thus birds will either sense or predict the wake left by their flock mates and regulate their fluttering consequently, a noteworthy ability, the researchers said.